(CNN) -- At least 510 people were killed in Caracas, Venezuela, in December, giving support to a recent report that called the city the murder capital of the world. 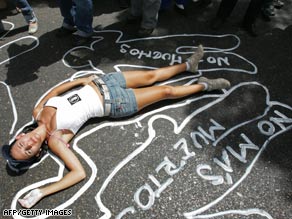 A chalk message reads No More Murders as a student protests killings in Caracas in this file photo.

It's against that backdrop that the country's minister for Interior Relations and Justice announced efforts this week to combat crime in 2009.

Minister Tareck El Aissami said Monday he will form 50 community police units in Caracas and take other measures so that "we can have in a short time a culture of peace, tranquility and calm for all the Venezuelan public."

By all accounts, it will be a tall order.

Foreign Policy magazine said in September that Caracas tops the list of five murder capitals of the world, with an official tally of 130 homicides per 100,000 residents. The city, which is Venezuela's capital, has about 4 million inhabitants.

Foreign Policy is owned by The Washington Post Co. and published by the Carnegie Endowment for International Peace.

Still, the rate in Caracas comes in far ahead of the following four murderous capitals.

"Caracas has become far more dangerous in recent years than any South American city, even beating out the once notorious Bogota, [Colombia]," Foreign Policy said.

"What's worse, the city's official homicide statistics likely fall short of the mark because they omit prison-related murders as well as deaths that the state never gets around to properly 'categorizing.'

"The numbers also don't count those who died while 'resisting arrest,' suggesting that Caracas' cops -- already known for their brutality against student protesters -- might be cooking the books," the magazine said.

"It's shocking," said Jennifer McCoy, director of The Americas Program at the Carter Center in Atlanta. "It's the biggest concern of the population -- crime and security."

Federico Welsch, a political science professor at La Universidad de Simon Bolivar in Caracas for 25 years, has seen that crime up close.

"Violence is the major problem for Venezuelans, according to any source you use," Welsch told CNN on Tuesday. "It's doubly sad because, primarily, the deaths occur almost exclusively in the poor sectors, and, secondarily, it's among youth under 30 years old."

McCoy points out that the killings are "basically poor on poor."

"It's a combination of economic-driven crime ... with other types of gangs, to police abuse," McCoy said. "The police are not properly trained and not properly equipped."

Anti-crime efforts in Caracas also suffered, she said, when the national government took over the city's police force in 2002.

"There has been trouble getting the police force back to par," she said.

"You can't resolve this problem with police," Welsch said. "The government is co-responsible for there being so many firearms. There is no good gun control, there are no permits and there is no good control over the militias."

The problem, Welsch and McCoy said, transcends the drug trade and gang battles.

Welsch lays much of the blame on the 10-year-old government of socialist President Hugo Chavez.

"The government discourse," he said, "is that if you are lacking something it is because of injustice. Then look for it, take it away from those who have it. You can obtain justice with your own hands."