LONDON, England (CNN) -- When Rory Stear appeared on the Principal Voices roundtable last year, his company Freeplay Energy was best known for cranking out wind-up radios you could, well, crank up. 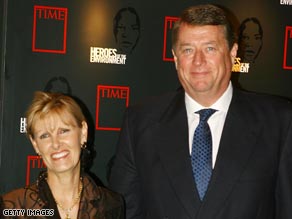 Africa was the main beneficiary of its best-known product, the Lifeline radio.

This year, the emphasis is on India, where, like Africa, millions of rural poor live without access to electricity.

"When you've got one billion people and that kind of energy poverty it's almost a perfect storm for us," Rory Stear says.

Freeplay Energy started manufacturing its first products in India in February. So far, around 6000 "Farmers' lights" and "Farmers' torches" have been distributed in Rajasthan, Uttar Pradesh and Haryana.

By the end of the year, it hopes to be supplying lights, radios and other products to the rest of the country.

For Freeplay Energy, the move into India has been a long time coming. It took years of research. Eventually the decision hinged on finding a "first-rate" partner.

" For me it was thrilling to be asked. And it's been a great experience. I regularly look at the website to see what's going on with other people and what's being said. "

"It's certainly great recognition of our work and that has been an extremely positive thing."

"Ultimately the recognition of the whole issue of energy poverty has helped to push it into the world scene."

Stear says he found just that in Devin Narang, former chairman of the Narang Group. One of India's oldest industrial houses, the group was founded by Devin's great-grandfather in 1905.

"In my mind this is the business of the future, especially for India," Devin Narang says.

"There are 600,000 villages, out of which 40,000 will never get electricity in our lifetime. The cost of transition is very high, it's prohibitive."

In the poorest villages, families use kerosene to power traditional Hurricane lamps.

Fire isn't the only risk. Kerosene is known to cause health problems, and its cost can be excessive for local people.

While the official rate for one liter of kerosene is 11.5 rupees, or 28 cents, on the black market it can sell for as much as 90 rupees, or more than two dollars.

The lantern costs a lot more -- around 800 rupees -- but Freeplay hopes it will replace the two to three liters of kerosene used by each family every month.

By that measure, after 13 months, the power created by the "Farmers' light" would effectively be free.

The hope is that wind-up lanterns will eventually replace the country's hurricane lamps, providing up to 20 minutes of "shine time" for each minute of winding.

Within months of appearing on the Principal Voices roundtable, TIME magazine named Rory Stear and his wife Kristine Pearson as two of their "Heroes of the Environment."

Kristine heads up the Freeplay Foundation, the charity Freeplay Energy founded in 1998. It was the foundation that did the early work researching solutions to energy poverty in Africa and India. click here to read about Freeplay in Africa.

Of his Principal Voices' experience, Rory says: "It was thrilling to be asked. It's certainly great recognition of our work and that has been an extremely positive thing.

"It's an extremely well known program now and to be a part of it implies a certain gravitas," he adds.

"Ultimately the recognition of the whole issue of energy poverty has helped to push it into the world scene."

At last year's Principal Voices roundtable, Rory Stear asked: "How can we enable access to self-sufficient energy by those who need it the most yet can afford it the least?"

With the help of local partners in Africa, and now India, he's going some way to finding the answer.