Lee Myung-bak: The 'Bulldozer' with a common touch

(CNN) -- For a man whose previous nickname was "the Bulldozer," balance might not be thought of as one of South Korean president Lee Myung-bak's strong points. 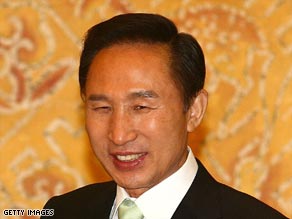 Promises of pragmatism and a more balanced society from the new president.

However, speaking to CNN for Talk Asia just a few weeks after his inauguration as president, restoring some equilibrium to South Korean society is one of the key aims of his presidency.

"My country has undergone rapid industrialization and development, as well as democratization," he told Anjali Rao.

"And throughout this process, I believe some sort of balance has been lost. The gap between the haves and the have-nots has widened lately, which I believe must be rectified."

It's not an unfamiliar sentiment for a politician to express, but Lee's journey from childhood poverty to the pinnacle of political life perhaps makes him more qualified than many politicians to relate to his electorate.

For many of his supporters his life reflects the recent history of South Korea itself. Lee Myung-bak was born in Osaka, Japan in 1941 during the Japanese occupation of the Korean peninsular and returned to Korea with his parents at the end of the Second World War.

Without any money to pay for his education, he paid his own way through university in Seoul, at one point taking a job as a garbage collector, working during the day, while studying at night. As a student he led protests against the authoritarian government, receiving a caution from police in 1962.

After graduating he took a job with Hyundai. His hard work and ambition saw that he became its CEO after just 12 years, at the age of 36.

It was as a dynamic young CEO, part of the new generation that was rapidly building South Korea's industry and economy in the 1970's and 80's, he gained the nickname "the Bulldozer" for his single-minded approach and tenacity to drive through difficult projects.

His transition from CEO to politician came when he became mayor of Seoul in 2002 and undertook one of the city' most ambitious and popular programs of urban renewal.

He was elected on the promise of transforming the city, ripping out a traffic-clogged elevated highway that ran through its center and restoring the Cheonggyecheon stream that had been covered over.

It's completion in 2005 led to a blooming example of the growing emphasis on quality of life in a country that had sacrificed economic and industrial growth for all else.

It also propelled him into the international spotlight, with TIME Magazine naming him one of its Heroes of the Environment in 2007.

He has not been without his detractors, however, and even after the election there were questions surrounding his ethics. While South Korea has been trying to shed its image of corporate corruption, just four days before his inauguration as president he was cleared of accusations of stock manipulation.

"During this rapid period, yes indeed, there were a lot of side effects. And one of them was corruption and that transparency was not prevalent in our society," he told CNN.

"Now that I am president, such a culture in the political culture, as well as the corporate culture, must change."

All About South Korea • North Korea