BEIJING, China (CNN) -- As Bus No. 37 pulled up at the Wangfujing stop near his office, Chris Tsao watched the line of waiting passengers quickly dissipate into a familiar scene of mild chaos as they pressed their way onto the standing-room-only bus. 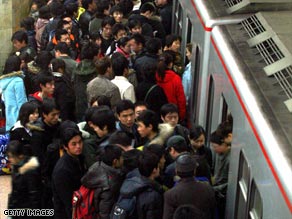 It's a squeeze: Commuters on the subway in Beijing pack into a busy train.

"This isn't too bad -- actually much better than the subway," observed the 35-year-old graphic designer one recent evening as he boarded the bus for home, some 6 kilometers away but easily a 40-minute trip in the capital's choking traffic.

As far as the preferred mode of public transportation goes, however, Tsao belongs to a growing number of Beijing residents who are opting for the slower bus to the supposedly far more efficient subway.

The Beijing Subway system, the country's oldest, is undergoing an unprecedented expansion ahead of the Summer Olympics. Three new lines will begin whisking passengers to and fro before the Games start in August and, by 2020, the route map will comprise 19 lines and 561 kilometers of tracks, making the network one of the world's largest.

Once a loyal subway rider, Tsao has given up on the train since last autumn. That was when the city authorities, in a bid to attract drivers of private cars off the road, slashed the ticket prices on the subway -- by more than half in some cases -- and introduced a flat fare of 2 Yuan (30 U.S. cents) with unlimited transfers.

The result has been undesirable: Surface roads remain congested and now so are subway stations. "Almost overnight the trains became so jam-packed that it was just mission impossible during rush hours," Tsao recalled.

"I always had to wait for four or five trains, and then got shoved into the train by the crowd behind me without having to lift my foot."

Other awkward moments ensued inside the sardine can-like carriages.

"As people typed on their phones right under my eyes, I was often forced to read their messages -- including a woman confessing to her husband about an affair," Tsao reminisced with some amusement.

After a few weeks of endurance, Tsao switched to the bus for a more dependable daily ride.

"On paper the subway is a lot faster, but buses are less crowded and have dedicated lanes on many streets -- I end up spending about the same amount of time on the road," he explained.

Tsao's sentiment echoes those of many others, prompting media coverage and online debates on the city's increasingly strained subway system whose average daily users exceed 3.5 million.

Busy stations not only deploy "door pushers" to help commuters squeeze into the carriages during peak times but also limit the number of passengers on the platforms out of safety concerns.

Amid mounting complaints about the system's glaring inadequacy, officials have reassured the public the problems are growing pains. They promise a much more enjoyable journey when improved signals system and state-of-the-art trains are in place in the coming months.

Tsao has decided to stick to the bus for now, having learned about new airport-like security checks at major subways stations ahead of the Olympics.

Although the mostly non-air conditioned buses offer a rather unpleasant passenger experience during Beijing's long hot summer days, Tsao unfortunately doesn't have the one fallback option most of his fellow countrymen do.

"I can't bike," he admitted, blaming his mountainous hometown. "Many of us from Chongqing have never learned how to bike because it's just impractical to pedal in the hilly terrain."