PHNOM PENH, Cambodia (CNN) -- Walking down a street in Cambodia's capital city, Phymean Noun finished her lunch and tossed her chicken bones into the trash. Seconds later, she watched in horror as several children fought to reclaim her discarded food. 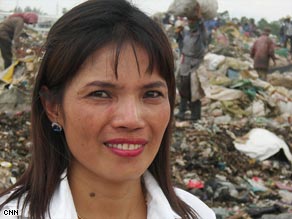 Phymean Noun is helping give Cambodian children a chance at a better life.

Noun stopped to talk with them. After hearing their stories of hardship, she knew she couldn't ignore their plight.

"I must do something to help these children get an education," she recalls thinking. "Even though they don't have money and live on the sidewalk, they deserve to go to school."

Six years after that incident, Noun is helping many of Phnom Penh's poorest children do just that.

Within weeks, she quit her job and started an organization to give underprivileged children an education. Noun spent $30,000 of her own money to get her first school off the ground.

In 2004, her organization -- the People Improvement Organization (PIO) -- opened a school at Phnom Penh's largest municipal trash dump, where children are a large source of labor.

Today, Noun provides 240 kids from the trash dump a free education, food, health services and an opportunity to be a child in a safe environment.

Watch Noun and some of the children who attend her school »

It is no easy task. Hundreds of them risk their lives every day working to support themselves and their families.

"I have seen a lot of kids killed by the garbage trucks," she recalls. Children as young as 7 scavenge hours at a time for recyclable materials. They make cents a day selling cans, metals and plastic bags.

Noun recruits the children at the dump to attend her organization because, she says, "I don't want them to continue picking trash and living in the dump. I want them to have an opportunity to learn."

"There were no schools during Pol Pot's regime," she recalls. "Everyone had to work in the fields. My mother was very smart. She told them that she didn't have an education. That was how she survived. If they knew she was educated, they would have killed her."

Noun's mother died of cancer when Phymean was 15. Phymean's sister fled to a refugee camp, leaving her young daughter in Phymean's care.

"When my mom passed away, my life was horrible, " says Noun. "It was very sad because there was only my niece who was 3 years old at that time." Yet Noun was determined to finish high school.

That dedication paid off, and after graduating she spent the next decade working with various aid organizations.

"I tell the children my story and about the importance of education," she said. "I'm their role model."

Some of the children who attend her school continue to work in the dump to support themselves and their families. Without an education, she said, these children would be vulnerable to traffickers or continue to be caught in the cycle of poverty.

"We are trying to provide them skills that they can use in the future," Noun said. "Even though we are poor and struggling and don't have money, we can go to school. I tell them not to give up hope."

Noun has even bigger plans for them. "These children are our next generation and our country depends on them. They are our future leaders."