KATHMANDU, Nepal (CNN) -- Nepal's former king said Wednesday he is not going to leave his country even though the monarchy has been abolished. 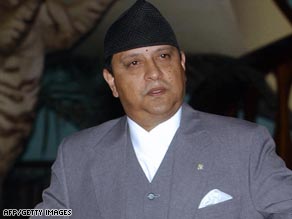 Gyanendra came to power in 2001 following the assassination of King Birendra and his family.

Ex-King Gyanendra, 60, made remarks to reporters before departing the Narayanhiti royal palace in Kathmandu.

He will live as a civilian in the former Himalayan kingdom that was made a republic last month, and he will reside in a summer palace on a forested hilltop outside the capital.

A few hundred journalists crammed into the opulent palace's lobby entrance to hear Gyanendra's remarks. It was a chaotic and undeferential scene replete with pushing, shoving and scuffling -- even while the former monarch was speaking.

While the former king spoke, reporters looked around at the lavish furnishings, including a huge crystal chandelier, stuffed tigers, stuffed rhino heads mounted on the walls and paintings of previous monarchs.

Gyanendra, who expressed his "love" for "independent Nepal," said all of his property will remain in the country and that he has no property outside the nation.

"I have no intention or thoughts to leave the country," he said. "I will stay in the country to help establish peace."

The monarchy's end after 239 years of rule was the culmination of a two-year peace process in which Maoist insurgents in Nepal gave up their armed struggle, joined mainstream politics and won the most seats in April's election for the Constituent Assembly.

The assembly is tasked with rewriting the constitution, deciding the country's future political system and governing the nation.

Gyanendra, who noted that the country is going through a "serious" stage now, said he accepts the new reality of a republic and reflected on the actions of the monarchy.

"I have done all I can to cooperate with (the government's) directives," he said, and added that "the monarchy in Nepal has always been with the people of Nepal in good times and bad times."

Gyanendra came to power in 2001 when his brother, King Birendra, and his family were massacred in the palace by the crown prince, who later shot himself. Gyanendra on Wednesday denied rumors that he had played a role in that event.

The ex-monarch also discussed events of 2005, when he he took over the civilian government to take on the Maoist insurgency, an unpopular move that sparked protests. He said he hopes people "understand" he didn't intend to infringe on any of the rights of the people.

He left the palace by a side entrance with pro-royalists and pro-republicans gathered outside to see his departure. His car had to stop momentarily as journalists took pictures of him.

Gyanendra's royal scepter and a crown of peacock feathers, yak hair and jewels remain in the palace and have been handed over to the government.