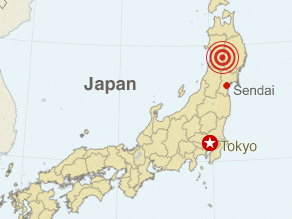 Officials said the earthquake led to the buckling of highways and caused some bridges to collapse. Bullet trains were also stopped in the affected areas.

Two nuclear power plants in the region were not affected, officials said.

Cabinet Secretary Nobutaka Machimura said one man was killed when he was buried in a landslide in Fukushima Prefecture and the other was struck by a truck as he rushed out of his house in Iwate Prefecture. Officials have not yet released details of the third death.

There were no tsunami warnings issued after the quake.