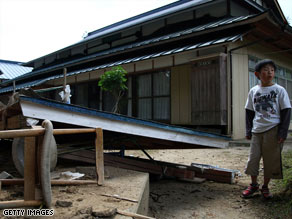 A boy stands outside a Kurikoma, Japan, home that was heavily damaged by Saturday's earthquake.

Cabinet Secretary Nobutaka Machimura said one man was killed when he was buried in a landslide in Fukushima Prefecture and the other was struck by a truck when he rushed out of his house in Iwate.