KATHMANDU, Nepal (CNN) -- Nepal's new government has converted its deposed king's opulent palace into a museum and unfurled the national flag on Sunday as a symbolic move to signify the end of monarchy. 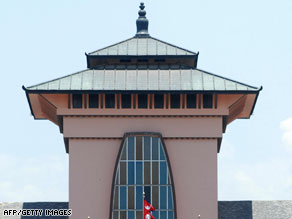 The Narayanthi Royal Palace has been converted into a museum.

"The national flag is fluttering in the hands of the people in the royal palace now," said Prime Minister Girija Prasad Koirala at a ceremony at the former palace Sunday.

Ex-King Gyanendra, 60, left Narayanhiti Royal Palace on Wednesday. He will live as a civilian in a summer palace on a forested hilltop outside the capital.

Gyanendra's departure came following the declaration of the former Himalayan kingdom as a republic last month.

The monarchy's end after 239 years of rule was the culmination of a two-year peace process in which Maoist insurgents in Nepal gave up their armed struggle, joined mainstream politics and won the most seats in April's election for the Constituent Assembly.

The assembly is tasked with rewriting the constitution, deciding the country's future political system and governing the nation.

Gyanendra came to power in 2001 when his brother, King Birendra, and his family were massacred in the palace by the crown prince, who later shot himself. Gyanendra last week denied rumors that he had played a role in that event.