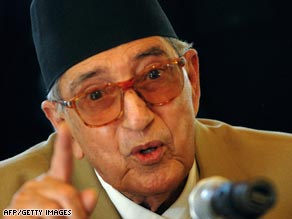 "I would like to announce my resignation from the post of prime minister in this constituent assembly," Koirala, 84, told the 601-member assembly.

Nepal's former rebels, the Communist Party of Nepal (Maoist), which became the largest party but fell short of a majority in the April elections, is now expected to form the new government.

"Koirala's resignation today is just a political statement which means that the government has now become a caretaker one," said Bhim Rawal of the Communist Party of Nepal (Unified Marxist Leninist) . "He will now have to formally hand in his resignation to the president once one is elected."

"Only after a president is elected, will a new government be formed," said Rawal.

Announcing his resignation Koirala said: "You political parties should not forget the path of unity and cooperation, even if it is minus Girija Prasad Koirala."

Nepal became a republic last month ending a 239-year-old monarchy but is still to get its first president.

Koirala's resignation Thursday follows a 22-point agreement Wednesday among Nepal's ruling seven-party coalition to elect a president and prime minister through a simple majority of the constituent assembly.

April's elections, the declaration of a republic and the drafting of a new constitution, the main task of the constituent assembly, are parts of a peace process following 10 years of fighting between the Maoists and the state which ended in November 2006 with a peace deal.