(CNN) -- Political tensions rose Tuesday across Turkey as police seized two retired generals, a prominent journalist and others accused of plotting to overthrow the government and prosecutors undertook a court case to ban the Islamic-rooted ruling party. 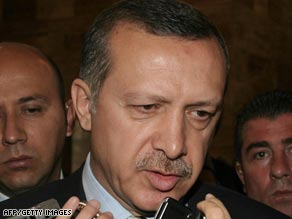 PM Tayyip Erdogan speaks to the media as Turkey's Constitutional Court hears evidence against his party.

The developments dramatize the sharp and serious political tensions between the country's Islamic-rooted ruling party -- the Justice and Development Party, or AKP -- and its outspoken critics from the nation's secularist establishment.

Since autumn, police have been arresting and jailing people accused of being part of Ergenekon, an alleged plot to overthrow the government. During the effort, there has been harassment of journalists, and news reports have said many people are being held without charge.

On Tuesday, police made 22 arrests in Ankara, Istanbul, Antalya and Trabzon, according to Turkey's semi-official Anadolu Agency, which said its information came from prosecutors. Three other people were being sought, the agency said.

Those seized include former generals Hursit Tolon and Sener Eruygur; Mustafa Balbay of the Cumhuriyet newspaper; Sinan Aygun, leader of the Ankara Trade Organization; and Ecument Ovali, a college professor. The newspaper said police conducted a search at its Ankara headquarters.

This came hours before a Turkish prosecutor presented evidence in a court case that would ban the AKP because of its alleged involvement in what prosecutors call anti-secularist activities, such as its failed support for toppling the ban on Muslim headscarf at universities.

Turkish secularists believe the AKP is intent on undermining the secular constitution and nature of the modern Turkish state and on intimidating political opposition. The popularly elected AKP believes the effort to disband the party is a political move and says it is promoting democracy and pursuing goals that would bring Turkey into the European Union.

This is the second time Cumhuriyet has been targeted with accusations of involvement in Ergenekon. In the spring, police briefly held the newspaper's editor, Ilhan Selcuk.

"We spoke with our lawyers after Balbay was taken away ... about these operations happening now as the chief prosecutor, Abdurrahman Yalcinkaya, started presenting his verbal explanations in the constitutional court," Arcayurek said.

"We don't know if this is a special treatment, or a coincidence. But I can say on behalf of everyone at Cumhuriyet newspaper, including editor in chief Ilhan Selcuk, we cannot be guilty of anything else but loving our country very much and protecting its rights. They cannot find anything else against us."

Turkey, a strong U.S. ally and NATO member, is a democratic state and has long been regarded as a bridge from Asia and Europe and from the West to the Muslim world.

Although it is a predominantly Muslim nation, Turkey has taken the trappings of religion out of public life, in accordance with the policies of Kemal Ataturk, the revered founder of the modern Turkish republic.

Ovali made reference to Ataturk when he spoke to reporters watching him being detained in Trabzon.

"I am being found guilty of loving Ataturk and the republic," he said.

Wolfgang Piccolo, an analyst for the Eurasia Group, said in a report Tuesday that the timing of the arrests and the high profile of those seized reflects the political nature of the Ergenekon probe.

"Coming a few hours before the first hearing in the closure case against the AKP, the arrests will further reinforce the already widely shared impression in Turkey that the operation is part of the power struggle between the AKP and the hard-line secularists, most notably the military," he said.

-- CNN's Talia Kayali in Atlanta contributed to this report

All About Turkey • Islam