SEOUL, South Korea (CNN) -- Tens of thousands of South Koreans were demonstrating Saturday on the streets of the capital to protest the government's decision to import what they say is unsafe U.S. beef. 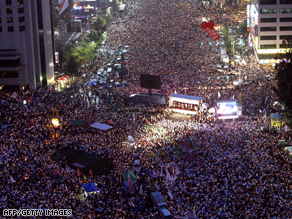 South Korean police estimate that the crowd in Seoul is about 50,000. No clashes were reported between the protesters and riot police, although ongoing protests have at times turned violent.

South Koreans have protested regularly since April when the government announced it would resume importing beef from the United States after a five-year ban. That ban was instituted over a case of mad cow disease in the United States in 2003.

The widespread public protests essentially paralyzed the government of President Lee Myung-bak, who replaced seven top aides this month and plans to reshuffle his Cabinet.

Tens of thousands of auto workers in South Korea went on strike Wednesday to oppose the government's lifting of the ban.

After a series of negotiations, Seoul and Washington came up with a revised agreement on June 21 -- one that limits imports to cattle younger than 30 months old.

Animals older than 30 months old are considered at a greater risk for mad cow disease, which can be transmitted to humans.

The revised agreement also excludes the import of certain parts believed more susceptible to mad cow disease. The initial deal would have allowed the import of all U.S. beef imports.

Eating meat products contaminated with the illness has been linked to variant Creutzfeldt-Jakob disease, a rare and fatal malady in humans.

Until the 2003 ban, South Korea was the third-largest market for U.S. beef exporters.

But the move provoked a backlash over health concerns spurred in part by false media reports about risks, along with a sense that South Korea had backed down too easily to American pressure.

The government has vowed to get tough with the rallies.

In Washington, the White House announced that Bush would visit South Korea on August 5-6 before heading to the Beijing Olympics.

Bush had originally been expected to go to Seoul next week when he visits Japan for the G-8 summit, but the trip did not materialize amid the protests.

All About South Korea • Lee Myung-bak