KABUL, Afghanistan (CNN) -- An Afghan government official said Monday's suicide car bombing outside the Indian Embassy in Afghanistan has "the hallmarks of the Pakistani intelligence." 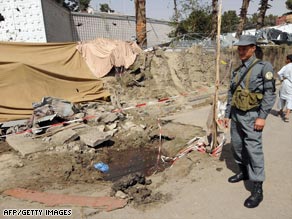 Police stand guard outside the front of the Indian Embassy in Kabul, one day after the blast

The official, who did not want to be named, said the investigation into the Kabul bombing that killed more than 40 people is still under way, but "all indications are" that Pakistan's intelligence service is behind the attack.

Humayun Hamidzada, a spokesman for Afghan President Hamid Karzai, would only say that the "sophistication of this attack and the kind of material that was used, the specific targeting ... has the hallmarks of a particular agency that has conducted similar attacks inside Afghanistan."

When asked about the accusations, Pakistan's government would not comment and referred CNN to Foreign Ministry spokesman Mohammed Sadiq who was out of the country.

Pakistan has denied previous accusations from Afghanistan that its intelligence service -- which once had strong ties with the Taliban -- has orchestrated attacks in Afghanistan.

The Monday morning bombing, which also injured 139, was one of the deadliest attacks in the Afghan capital of Kabul since U.S. forces ousted the Islamic militia, the Taliban, in 2001. iReport.com: Smoke rises from blast zone

The suicide attacker detonated in a crowded street outside the embassy where dozens of people were lined up to apply for visas.

Karzai on Monday expressed condolences for the deaths of the Indian Embassy's defense attache, its counsellor and two other Indians and more than 40 innocent Afghan civilians.

"This abominable act of terrorism is the work of the enemies of Afghanistan's friendship with India and I condemn it in the strongest possible terms," he said in a statement released by his office.

Afghan authorities leveled a similar accusation against Pakistan's intelligence agency after an attempt on Karzai's life in April.

He escaped unhurt when gunmen opened fire at a military ceremony commemorating Mujahedeen Day -- the 16th anniversary of Afghanistan mujahedeen fighters' overthrow of the Soviet-backed regime. The attack killed an Afghan lawmaker, a tribal leader and a child.

"The evidence once again shows that the soil of Pakistan has been used against us," Amrullah Saleh, the head of Afghanistan's intelligence service, told CNN at the time.

"Clearly there (is) very, very strong evidence suggesting that Pakistan soil once again has been used to inflict pain upon our nation."

Adding fresh ammunition to the suspicions, the Rand Corporation -- a U.S. think tank -- released a report last month that said some members of Pakistan's intelligence service and its paramilitary corps were helping insurgents in Afghanistan.

The study, funded by the U.S. Defense Department, alleged that members of the two agencies often tipped off militants to the location and movement of coalition forces trying to rout them. It also said personnel within the agencies trained fighters at camps in Pakistan, financed them and helped them cross the border into Afghanistan.

The Pakistani military denied and denounced the report, calling it a "smear campaign" designed to "create doubts and suspicion in the minds of (the) target audience."

The bad blood between the countries have a history that dates back several years. During the Soviet occupation of Afghanistan in the 1980s, religious schools in Pakistan helped train fighters who battled the Soviets.

After the Taliban took over Afghanistan and imposed fundamentalist rule from 1996 to 2001, Pakistan was one of the few countries that recognized the regime diplomatically.

It dropped its support after the September 11, 2001 terrorist attacks in Washington and New York. But Afghanistan claims that Pakistan continues to informally support the militants who operate from havens in Pakistan's lawless tribal regions near the 1,500-mile porous border that the two countries share.

The relations between the two countries strained to such a point that Karzai has threatened to send troops across the border to take on the militants.

Pakistan and India -- neighbors with nuclear weapons -- have fought three wars over the disputed Kashmir region.

All About Afghanistan • Kabul • Pakistan • The Taliban • Hamid Karzai