(CNN) -- Elected with the largest margin of victory in the history of Taiwan's presidential elections, President Ma Ying-jeou is aiming to bring the good times back to Taiwan while looking to a friendlier future with China. 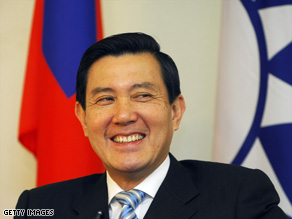 Smiling through it: President Ma Ying-jeou has some tough challenges ahead.

Winning 58 percent of the vote, Ma was swept to victory on the promise of economic growth but through the more controversial method of building closer ties with China.

With the backdrop of economic depression Ma's calls to reinvigorate the economy by freer trade and improved relations with China proved stronger than the fears that those ties could lead to a loss in independence.

Nevertheless, with a message of rapprochement, the charismatic former mayor of Taipei has a tough job on his hands in his first presidency.

Born in Hong Kong in 1950, Ma studied at Harvard Law School and worked as a lawyer in New York in 1981 before returning Taiwan.

He held a number of posts in government ministries from 1988, including Minister for Justice for three years from 1993.

However, it was not until he was elected mayor of Taipei in 1998 that he emerged as a potential future president, and he was elected as chairman of the Kuomintang, Taiwan's Nationalist party, in July 2005.

Yet having built up a solid reputation in Taiwan's notoriously volatile political culture, his image was tarnished by allegations of corruption while mayor of Taipei in 2006.

It was alleged that he had misappropriated around $340,000, and after resigning his position as head of the Kuomintang to fight the charges, he was finally cleared of all allegations in 2007.

With a clear mandate and popular support he occupies a unique position in Asian politics; TIME Magazine has said he is in the rare position of being a politician who has the "opportunity to shape the destiny not only of their own nation but also of an entire region."

Ma's administration hopes that Chinese tourists from the mainland will boost the sluggish tourism industry and talks are already underway to increase the number of weekly flights.

In a further signal of détente, Guangdong province in China has offered the Taiwanese port city of Kaohsiung two white tigers as a symbol of improved relations.

Allaying fears, breaking down generations of mistrust and making Taiwan's economy roar again will be the considerable challenges of Ma's administration; the former barrister will have to use all his negotiating skills to try and fulfill his ambitions.

All About Taiwan • Ma Ying-jeou • China