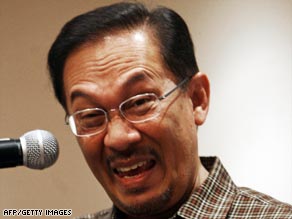 Anwar had been scheduled to give his statement to police over sodomy allegations before the arrest.

"This is a trick to deflect from the problem of corruption and mismanagement of the economy," Anwar told CNN.

The arrest Wednesday, which the U.S. State Department said "raises serious questions and concerns," is the second time Anwar, one of Asia's best-known opposition leaders, has been incarcerated on charges including sodomy and comes after a coalition he led gained seats in the country's parliamentary elections.

Anwar, who was released on bail earlier Thursday, said his arrest and the whole investigation is being conducted by the same police officials whom he claims hid evidence that could have cleared him in his sodomy-related conviction in 1999.

The opposition leader said he was ambushed Wednesday by police when he was trying to turn himself in, strip searched, and interrogated for more than five hours.

Watch Anwar speak out against charges to CNN »

"How do you expect me to get justice when the police have resulted to these very crude and unprofessional ways?" Awar asked. "I have not received a police report until this day. According to the law that document should be a public document. I cannot even verify that there is a complainant in the first place."

Anwar said that during the entire interview, police never talked about any evidence in the case. They also asked for a blood sample -- the same tactic they used 10 years ago to fabricate DNA evidence against him, Anwar charged.

A 23-year-old male aide has accused Anwar, 60, of sodomizing him at a luxury apartment in June. Anwar has said the allegations are meant to tamp down his political gains.

Sodomy, even if consensual, is punishable by 20 years in prison in the majority-Muslim country.

A loose coalition of opposition parties -- with Anwar at the helm -- won 82 of 222 parliamentary seats in elections in March. It was only the second time in the country's history that the ruling party failed to gain the two-thirds majority needed to amend Malaysia's constitution.

Anwar spent six years in prison after being convicted on corruption charges in 1999 and on sodomy charges involving his wife's former driver in 2000. Malaysia's highest court overturned the sodomy conviction and ordered him released from prison in 2004.

He left prison in a wheelchair due to injuries he blamed on a 1998 beating by Malaysia's then-police chief.

"We believe the detention today of prominent Malaysian opposition figure Anwar Ibrahim raises serious questions and concerns," said department spokesman Sean McCormack in a written statement. "We urge Malaysian authorities to resolve this matter in a manner that builds confidence in the impartial rule of law in Malaysia."

But Albar said politics played no role in the arrest.

"Anwar is not above the law; everyone is within the law," Albar told CNN in a telephone interview. "We will look at it purely as a case of criminality that the government needs to investigate."

He cited opposition gains in the March elections and Anwar's relatively short stay before he was freed on bail as evidence Malaysia's government is not out to get the politician. He said police took two weeks to investigate the charges against him before an arrest was made.

"We went slowly, knowing the international community is observing us on this -- knowing his popularity on the international level," Albar said. "To be fair, you must give the complainant the chance that he's being heard. It is the right of a citizen. It is the police's duty to investigate."

Anwar, a former deputy premier many believed to be the heir apparent to former Prime Minister Mahathir Mohamad, has long said the past charges against him were politically motivated. The investigating officer in his original sodomy case was Malaysia's chief of police, and the prosecutor was the nation's attorney general.

While his sodomy conviction was overturned, the corruption conviction never was -- barring him from running for office again until this year.