(CNN) -- Who would think the banks would land the job of sorting out the world's climate change problems? 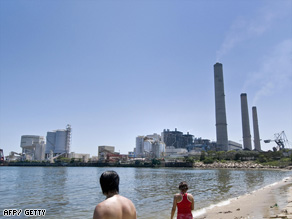 'Cap and trade' has been touted as way to encourage investment in renewable energy.

But strange as it may seem, there are many who believe that only the world's financial institutions can help us now.

Since the arrival of the European Union's Emission Trading Scheme (EU ETS) and the 'Kyoto Market', backed by the United Nations' Clean Development Mechanism (CDM), some of the world's biggest banks have been stepping up their activities in carbon finance.

They say it is to ensure these two carbon trading markets actually do what they are supposed to do. And that is to reduce emissions and to spur the global move towards renewable energy.

Their detractors, however, are concerned that all carbon trading will ultimately do is make the banks a lot of money.

Under the ETS system, around 12,000 polluting installations across the EU have been "capped" with greenhouse gas quotas based on the host countries' Kyoto obligations. The ones that exceed their cap must buy "carbon permits" from other companies that operate below their own quota.

Under the CDM scheme, companies in the developed world that have exceeded their cap can pay off their carbon debt by investing in CDM-approved eco projects in developing countries using "carbon credits" -- one credit equaling one tonne of avoided C02 equivalent gases that would have otherwise been pumped into the atmosphere.

Proponents of carbon trading -- or "cap and trade" as it is sometimes called -- say it will offer incentives to companies setting out on the road to sustainability, and will hit polluting companies where it hurts most - their wallets.

Supporters also say that more sophisticated financial products developed by the banks will spur the demand for carbon credits, putting even more of a squeeze on companies not getting on the sustainable bandwagon.

But it could also hurt consumers too.

If demand for carbon credits go sky high, so will their prices. When the companies forced to buy carbon credits are energy companies, the costs they incur could ultimately get passed down the line, which would then mean higher fuel bills.

According to Abyd Karmali, the London-based global head of carbon emissions for Merrill Lynch, however, that is just par for the course. He believes financial pressure could be the only thing to get the world switching to a more sustainable way of life -- and that applies to companies and individuals alike.

"We have to find a way to price CO2," Karmali says.

"These sectors are grappling in an environment where there is now a price on C02. So it is providing them an opportunity to reduce emissions. They are passing costs on to the consumer, but what we are now seeing in Europe is an increasing demand for energy efficient products.

"And this is how the carbon market is supposed to work."

When more people and companies get their heads around energy efficiency and sustainable living, price volatility will ease off, he says.

"In the short term there will be price volatility and political backlash, but the long term trend is fairly clear: undertaking reductions now is significantly cheaper than inaction," says Karmali.

"And that over time there will be a reduction in the price volatility as behavior changes."

Critics of carbon trading have often referred to it as a "zero-sum" game, as any C02 saving gained from the investment is effectively neutralized by the fact that the purchaser has avoided having to decrease its own C02 emissions.

"The real question is whether carbon trading in the end will have any impact on greenhouse gas emissions," says David St Maur Sheil, director and co-founder of the Association for Sustainable and Responsible Investment in Asia (ASrIA) in Hong Kong.

"Some say that in a way it is developing into something that is very effective as a market but not having the proportionate amount of impact."

What hasn't helped matters recently have been revelations of companies gaining CDM financing for renewable energy projects they were planning to undertake anyway, undermining the very principle of how carbon credits get issued.

"The whole point of carbon trading is to make investments that wouldn't ordinarily have taken place," says Sheil.

"In some cases it has been shown that companies have intended to make this investment anyway, which throws into question how the system can be manipulated."

According to the World Bank, the global carbon market doubled in size from 2006 to 2007, reaching $64 billion; $50 billion of that passed through the ETS market, representing 2.1 billion permits/tonnes of C02 equivalent.

The CDM mechanism's trading volume, on the other hand, has been relatively modest, with an estimated 551 million credits/tonnes of C02 equivalent passing through the primary market last year, according to World Bank, worth around $7.4 billion.

Out of that, the vast majority of CDM business has gone to China. By contrast Africa has been largely overlooked, leaving some complaining that the very countries that could do with the extra money are being ignored in favor of markets that can fund themselves.

"These carbon markets do demand - and need - a certain level of infrastructure; they also need to build up within those countries experienced people that can build the industry," says ASrIA's Sheil.

"Places like Africa where there is less money, it could be prioritized."

Karmali points out however that one of the reasons Africa has been largely overlooked is mainly because of investors chasing gases with higher global warming potential -- such as the refrigeration gas HFC which can be eliminated cheaply -- that gives them better deals.

He says Merrill Lynch is currently putting together a portfolio of renewable energy assets from the continent.

While Merrill Lynch says its business is split 50/50 between ETS and CDM, Karmali says its future is firmly with Kyoto's CDM scheme.

And key to its future success will be fine tuning the variety of risks associated with trading in it.

In the early days of the carbon credit market it was a confusing landscape to navigate, says Karmali, not least for the large numbers of consultants and experts companies had to deal with who were not always well-versed in Kyoto or the CDM and the various risks involved in embarking in these projects.

Today, the resources available to CDM traders are markedly better, he says, largely because banks like Merrill Lynch have started expanding their operations into new areas, including building their own portfolios of CDM projects to offer clients.

"It is much more sophisticated. People have realized to be successful you need the Kyoto institutional knowledge. You then have to have project management expertise, someone top notch sitting on a project. You now see banks like Merrill Lynch involved in greater levels in the carbon credit market."

However, there are concerns that with the arrival of big players like Merrill Lynch on the scene, the carbon market could get a little too sophisticated, attracting increasingly complicated financial products to the market, which could generate big fees for the product providers but leaving the investors potentially exposed.

"What the banks are now doing is finding the projects themselves and creating portfolios for clients. When the financial organization is putting this together they can group together high risk and low risk and make it physically safer for investors," says Sheil.