Two bodies found after B-52 crash near Guam

(CNN) -- Two airmen were found dead in the Pacific Ocean and rescuers were trying to find four others after a U.S. Air Force B-52 crashed off the island of Guam on Monday, the Air Force said. 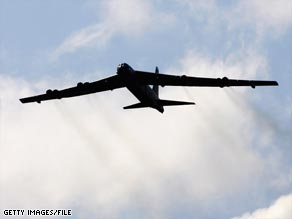 Rescuers found the bodies about 30 miles northwest of Guam, not far from where the bomber was believed to have crashed at about 9:45 a.m. local time, the Air Force said.

One of the dead airmen was identified, but the identity was withheld pending family notification, the Air Force said.

Search crews have found no survivors, but they are still looking, said Lt. Elizabeth Buendia, a spokeswoman for the U.S. Coast Guard in Guam, which is a U.S. territory.

The B-52H Stratofortress had six airmen aboard and was on a training mission when it crashed, the Air Force said. It was scheduled to fly over crowds celebrating Liberation Day, which commemorates the U.S. capture of Guam from Japan in 1944, the Air Force said.

No weapons or munitions were aboard the aircraft and information on what led to the crash wasn't available, the Air Force said.

In February, a B-2 stealth bomber crashed shortly after takeoff from Andersen Air Force Base. Two crew members ejected and were in good condition afterward.