HONG KONG, China (CNN) -- For this week's Eco Solutions show, the CNN team traveled up the Mekong River to discover how conservations groups have found innovative ways to protect the cantor soft shell turtle. Follow their journey in the photo gallery. 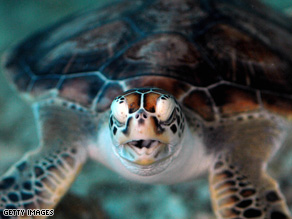 Green turtles are just one species that have been threatened by hunting.

Elsewhere in Asia, Ketut Putra, director of Conservation International's marine program in Indonesia talks to CNN about the surprisingly simple methods the organization has used to persuade turtle hunters to become turtle protectors on Ayau Island in the remote archipelago of Raja Ampat.

CNN: How did Conservation International's (CI) work with turtles start in Indonesia?

Putra: We started the program in 2005 in March as a start-up. We didn't start in Ayau but in Piai and Sayang Islands, some of the turtle nesting places in Raja Ampat, 100 km away from Ayau Island. When we went to Piai Island, we saw about 40 green turtles were killed in the week we were there alone, so we asked the locals who were killing the turtles. They said it was the people from Ayau.

We thought about this and the history of hunting turtles and learned they had in fact been doing this for many years. We had also learned that next door to Ayau Island had been a good nesting place for turtles but it was already gone because of hunting.

The reality is there has been an almost 80 percent decline in the nesting population in Piai and Sayang Islands in the last 40 years.

CNN: So what was your tactic for confronting the Ayau Islanders?

Putra: We tried to understand the Ayau people, so we had a meeting with the local leaders in the July and told them about the turtles. The people in Ayau were actually very committed to conservation and they said they would love to conserve them when we discussed this with them.

Through a number of meetings, our staff went back to learn more about their expectations and their willingness to change. They didn't have any problem with stopping eating turtles but they did expect another protein source so they asked if CI could provide some kind of meat for them to eat for their Christmas dinners and special occasions like that.

CNN: What was CI's suggestion?

Putra: There is fish there in Ayau but no pigs or cattle so turtles are a main source of meat for them. So we asked, would you like a pig farm in your area and you can grow your own crops in order to supply food for the pigs? The community leaders were very committed to that so we invited them to Bali, as there are so many pig farms there and we trained them about pig farming and took them back to Ayau.

We then asked some consultants to analyse Ayau Island to see what kind of crops were suitable to grow there. They said they could grow crops like cassava, pineapple for example. Three out of the six villages have committed to start the pig farming program. The other three villages were not very involved in the turtle hunting process so we focused on [the other three]. Now they are cultivating those pigs there and are committed to stopping hunting turtles.

CNN: What has happened to the turtle population?

Putra: In Piai the turtles are coming back. Before we did this program, we could see all the turtles were being killed but since the program started in September 2006 there have been about 1,700 turtles [that have been] saved and successfully hatched. Before, every mother was being killed.

CNN: So has the hunting stopped?

Putra: From our observation, the Ayau people have not gone back to hunting turtles.

CNN: Is there anything else in place to protect the turtles?

Putra: One of our programs had been training local community heads on Piai Island and we worked closely with the Papua Turtle Foundation, a local NGO, to create a training program in order to set up a patrol system. Those people are available 24 hours a day and CI provides grants for the local NGO to pay them. The Piai Island is now a marine protected area (MPA), not just for turtles but for fish breeding sites.

However, while we have put the initial impetus in we want the government to develop the capacity to manage the area properly. Our role is catalysing this process. One of the big commitments is the government declaring this whole area a MPA, which means they don't allow any kind of bad development to go on in these islands that are being protected. We want to use MPA as a legal basis to address the issue [of turtle hunting].