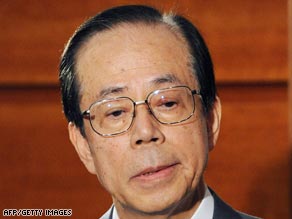 The prime minister asked the Cabinet on Friday to resign en masse "amid the recent surge in commodity prices and Japan's aging society," the Kyodo news agency said.

The government issued an e-mail identifying the new lineup.

Seiko Noda, a popular young female politician, has been chosen as Minister of State for consumer affairs, space policy, food safety, and science and technology.

The changes come about six weeks after Japan's opposition-controlled upper house of parliament approved a motion of no-confidence in Fukuda.

No-confidence motions only count in Japan when approved by the lower house, which is currently controlled by Fukuda's political party.

Even so, analysts say the no-confidence motion was a stinging rebuke for a prime minister whose popularity plummeted after his government introduced a medical plan in April for people over age 75. It raises premiums and deducts healthcare expenses from pension payments.