By Kevin Voigt
For CNN 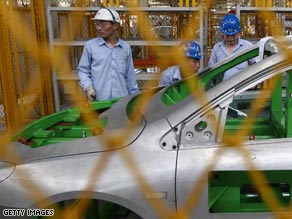 Workers at a factory for the Chery Automobile Co. in mid-July in Anhui province, China.

If history has anything to say about it, the answer is -- no.

The seven-year run-up to the Olympics has seen China's white-hot economy chug along at more than 10 percent growth every year. Investment for infrastructure for the games is somewhere near US$40 billion.

More than half a million visitors are expected, and with the confluence of online streaming of the games with traditional broadcast, this Summer Olympics could become the most watched in history.

The prestige of holding the games has long been touted for its long-term economic benefits of host cities, as their city and country are thrust into the international spotlight for nearly three weeks. Yet examination of the "before" and "after" effect of the host nations suggest the economic gains of holding the games are more sprint than marathon.

According to analysis by HSBC of every Summer Olympic games since the end of World War II, the GDP growth of the Olympic host nation drops below global averages. For example:

"There is always a slowdown after the games," said Robbert Van Batenburg, head of research for Louis Capital Markets in New York. For China, this "would be particularly troublesome as it already faces the risk of a supply glut," he said. The surge of demand in cement, media, technology and tourism industries before the games are particularly at risk for sharp drop-offs after the games, he said.

Host cities often predict a post-Olympics tourism boom in the afterglow of hosting the Olympics. The actual record, however, refutes this. A study by James Giesecke and John Madden from the Centre of Policy Studies at Monash University in Australia shows that tourism to Sydney after the 2000 Olympics grew less than tourism to Australia as a whole.

A recent study by the European Tour Operators Association found that Greece has fallen behind regional competitors Turkey and Croatia since hosting the 2004 Athens Olympics.

Wild-card events that could hurt the post-Olympics economy China, according to Louis Capital Markets: political protests, the risk of a contagious disease outbreak like Avian Influenza or SARS during the games, pollution problems and risk of terrorist attacks.

Analysts are particularly concerned about the global impact of a post-Olympics slowdown: China's heated growth has been the one bright spot in an increasingly troubled world economy.

"So far, China has been able to defy gravity," Batenburg said. "If the U.S., European and Japanese economies go into negative growth ... (China) can't export outside the country, then you get a deflationary environment on finished goods with an inflationary environment with raw materials.

"As much as I am a proponent of globalization, if (current trends) drag the Chinese economy with it, it could take years to rebound," he said.

Most Chinese economists believe China's economy will defy historical expectations of a post-Olympics hangover. In June, Chinese economist Fan Gang, a member of the central bank monetary policy board, pointed out the total investment in the games is a fraction of Chinese gross domestic product, which topped US$3.6 trillion in 2007.

"China is a big country. Beijing is small," Xinhua quoted Fan as saying. "Even if Beijing's investment in infrastructure drops sharply after the games, it would not have a significant impact on the whole economy."

His comments echoed those made in May by the new World Bank chief economist Justin Lin, who predicted investments in infrastructure across the country would continue, especially as it hosts the World Expo and Asian Games in 2010.