(CNN) -- The head of Pakistan's ruling coalition announced Thursday that the government will move to impeach President Pervez Musharraf. 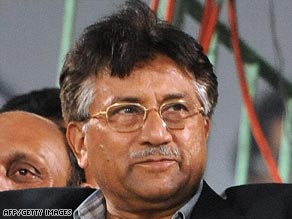 President Pervez Musharraf took control of Pakistan in a military coup in 1999.

"The coalition reaffirmed the resolve of democracy and democratic forces will work jointly to make a transition to genuine democracy," the head of Pakistan People's Party Asif Ali Zardari said, reading a joint communique with his coalition partners.

Before pursuing impeachment proceedings, Pakistani lawmakers will demand Musharraf take a vote of confidence in the newly elected parliament, which he had vowed to do last year, Zardari said.

"The people of Pakistan gave a clear mandate in favor of democracy and democratic forces and voted for the change to oust Gen. Musharraf by defeating his ... party," Zardari added.

"In spite of his clear commitment that if his party was defeated in the election he would resign, he continues to cling to the office of the president."

Watch an expert talk about the impact of a possible impeachment »

If Musharraf does not request a vote of confidence, the National Assembly will meet on Monday to consider impeachment proceedings, PPP spokesman Capt. Wasif Syed told CNN. Speaking a short time before Thursday's announcement, Syed said there are enough votes in parliament right now to impeach the president.

But Musharraf may still have one card up his sleeve: he could move to dissolve parliament and dismiss the prime minister.

Amid the political upheaval, Prime Minister Yousaf Raza Gilani will replace Musharraf at the opening ceremony of the Olympics on Friday in Beijing, Pakistan's state-run news agency reported.

Musharraf, who seized power in a 1999 bloodless military coup, has seen his power erode significantly since he stepped down as the country's military ruler last year and since the opposition parties' victory in February's parliamentary elections.

The new civilian government is under a lot of pressure to control Taliban and al Qaeda militants in its tribal region along the Afghan border. The CIA recently accused Pakistan's intelligence service of providing support for the militants who bombed India's embassy in Kabul, Afghanistan last month.

Asked about the situation, Dr. Ishtiaq Ahmad -- an Islamabad-based political analyst -- told CNN on Wednesday that he believes Musharraf "will fight back" against any attempt to remove him from power.

"Before they impeach the president, he might pre-empt them by using article 58(2b)," he said, referring to the constitutional article that gives the president power to dissolve parliament and dismiss the prime minister.

Ahmad, a professor of international relations at Islamabad's Quaid-i-Azam University, said any attempt to remove Musharraf would be a "next to an impossible task" because the president still has support.

"The army doesn't want him to be eliminated. The Americans are still favoring him," he noted.