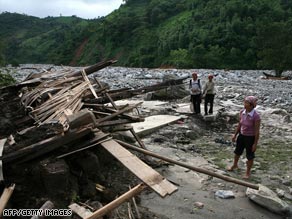 Vietnamese villagers look at the rubble where 19 houses stood before a flash-flood ripped away the hamlet of Tung Chin in Lao Cai province.

The floods in the the country's northern mountain provinces damaged tens of thousands of homes, swept away thousands of cattle and submerged crops, the Vietnam News Agency said. More than two dozen people remained missing.

Officials mobilized thousands of rescue workers to look for survivors and to carry relief to the areas hardest hit by the storm.

The southeast Asian country is prone to heavy rainfall during the May through September monsoon season. The resulting landslides and floods have killed hundreds in past years.