Unwelcome visitors cause havoc for bees

(CNN) -- With rising energy prices and the global biofuel rush already putting pressure on food prices, more news that some countries' food supplies are being threatened from other corners is never welcome. But new research from the British Beekeeping Association (BBKA) released last week seemed to promise exactly that. 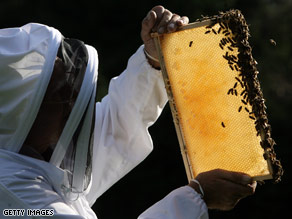 A British beekeeper checks up on one of his colonies. Bee populations fell by 30 percent last year.

According to the BBKA, the country's honeybee populations fell by 30 percent in the past year.

Why should we care?

In the West at least, it is said that bees are to thank for putting one third of everything we eat on our tables. For humans they are also the most important pollinator on Earth.

In the UK, 70 crops depend on bees' pollinating skills, BBKA says; while in the U.S. the value of bees are much higher, pollinating as many as 130 crops a year, their services worth $15 billion, according to the U.S. Department of Agriculture.

The BBKA is seriously concerned that Britain may be the latest victim of a mysterious phenomenon called Colony Collapse Disorder (CCD) where hive populations disappear without a trace. But it is even more concerned that if the UK Government fails to take this seriously enough, that honeybees could disappear from the country in less than 10 years.

Are virus-carrying alien mites to blame?

Declining bee populations were first spotted in the U.S. in late 2006 when some hives were reported to have hemorrhaged as much as 90 percent of their populations for no apparent reason.

Theories have abounded since regarding the cause of CCD which have ranged from mobile phone signals to the use of pesticides, but one theory has stayed its course.

It is also a favorite of BBKA's president Tim Lovett -- a virus carried by the Varroa mite, a blood-sucking non-native parasite which Lovett suspects first got into the Uk in the early 1990's and has spread like wildfire ever since.

"It was first discovered in Devon in the early 1990's and no-one is really sure how it got here." says Lovett.

"Then three or four years ago we began to realize the treatment we were using for it...which was approved for treatment of Varroa mites. They became resistant to it and strangely that also started in Devon."

Lovett believes that mites can only have been imported by beekeepers as no host bee carrying the parasite could have made it to the country on its own.

"The English Channel has been a good protective element for the Uk for some years. It's a hell of a flight for a bumblebee... the most likely thing is someone imported a Queen, and they normally come with workers and attendants and they probably had the mites."

While the mites were an irritant they were not necessarily a massive problem at first. For obvious reasons, parasites do not tend to kill their hosts. But if a non-native parasite is carrying a disease, the new hosts may not be able to withstand it, says Lovett.

"It doesn't mean to kill," says Lovett. "The viruses don't cause any illness to the Varrao but they are the carriers... European bees had no exposure to it and no ability to handle it."

While Lovett says a disease being carried by the Varrao is a likely cause of the disappearing bees, he can't be absolutely sure. "Nobody has carried out the work to see if it is these mites," he says.

For this reason, he and the BBKA are pressing the UK government to invest £8 million ($14.8 million) into researching declines in bee populations so they have a better idea.

A spokesperson from the Uk Department for Environment, Food and Rural Affairs (Defra) however, says that no significant increases in bee research are likely to happen any time soon.

"Funding for Defra's bee health program is expected to be unchanged in 2008/2009," the spokesperson says, reasoning that the Defra has no extra money to spare at the moment.

"There are currently significant pressures on financing across all areas of the Department's work," says the spokesperson. "The fact that funding for the bee health program has been maintained at the same level over a number of years, when other programs have faced major cuts, is a positive signal of the importance Government attaches to this area of work."

Currently Defra allocates £1.3 million a year to research in this area. This year "specific bee health research funding" will amount to "nearly £200,000" and the Uk government's National Bee Unit will be given an additional £90,000 this year "to help investigate the higher levels of colony loss".

The Defra spokesperson also added that the Uk government is currently developing a "bee health strategy" which will outline their plans for a bee programmer over the next 10 years.

Lovett isn't impressed. "It is ridiculous to say they haven't got the money. £8 million is literally small change, it is nothing," he says.

"This is no time for the government to put at risk the greenest, the most effective fertilizer you can get -- bees."