Keeping watch over the 'megafishes'

HONG KONG, China (CNN) -- They might not be as cute as pandas but the threats facing the world's giant freshwater fish need to be taken just as seriously -- in fact more so, according to Dr. Zeb Hogan. 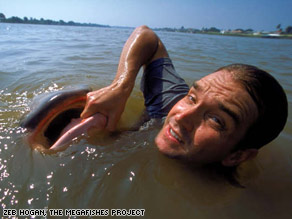 Zeb Hogan getting to grips with a giant catfish in the Tonlé Sap River in Cambodia.

Hogan, an ecologist, photographer and an associate professor at the University of Nevada, heads up the Megafishes Project, a four-year collaboration with the National Geographic Society and the World Wildlife Fund (WWF). The project, Hogan says is the world's first attempt to identify and document the world's remaining giant freshwater fish.

Why? So that they get a chance of gaining protection from the threat of extinction -- before it's too late.

Hogan says the decline in populations of the world's biggest freshwater fishes is offering the world an early environmental warning call. CNN asks him why.

CNN: Why should we care about these "megafishes" specifically?

Hogan: The Mekong River has 60 million people who depend on protein from fish. About a third of all giant fish species occur in the Mekong. But these large fish now are so rare that people aren't catching enough of them so that they significantly contribute to people's diets anymore. They used to -- but they don't anymore. When the big fish are gone, or when they become very rare, that's a warning sign that, OK, we need to start managing our fisheries a little bit better because we have lost the big fish so next is going to be the medium fish and the small fish and then we are all really in trouble.

CNN: Is this happening anywhere already?

Hogan: We started to see this in Cambodia last year because the big fish are already gone, but the catch of small fish was really low last year and the price increased by 1,000 percent. Small fish are now the staple food for Cambodian people and their main staple food has increased in price by 1,000 percent. You can imagine the impact that has on people. So we can ignore these big fish but eventually it will be to our own peril.

CNN: What are the main threats facing these freshwater giants?

Hogan: The biggest threats are pollution, dams and overexploitation. Dams are a big one. Overfishing is a threat but it rarely leads to the complete extinction of a fish species, so you need something else. A dam can lead to [their] complete extinction. The Mekong Giant Catfish spawns in northern Thailand and if someone builds a dam in the middle of the Mekong and those fish cannot move up to their spawning grounds that affects every single fish.

I think a great example of that is if you compare the Mekong River with the Yangtze River. The Mekong River, these large fish are very rare but they are still there and the Mekong has not been dammed. The Yangtze has been dammed and of the two largest fish species, one may be extinct already and the other one is endangered.

The shocking thing in my mind is that people don't even know they are gone until someone goes out and looks for these things. And we don't have a lot of people looking for these animals.

CNN: Why do you think that's the case?

Hogan: I think there are two big reasons. One reason is because fish are thought of as food. Conservation organizations, they rely on the public, you know, there has to be public interest in the species they are trying to conserve or they can't get the money and they can't get people interested in what they are trying to do. And so people I think just have a hard time about thinking of [these kinds of] fish as a biodiversity issue. Fish are viewed as a food security issue.

The second reason is these fish occur in an extremely large, deep, muddy, river and you will never see them unless you can dedicate your life to trying to find them! Like the Mekong Giant Catfish, there is maybe 10 caught a year, and there are probably only 1,000 people that have ever seen one. You can see birds in your backyard, you can go see a panda bear, even if it's only on TV, there are animals out there that people can appreciate, that they can sympathize with, and they can relate to. And people have a harder time seeing and sympathizing with and relating to a fish, I think.

CNN: How many "megafishes" that you looking for would qualify for the World Conservation Union's (IUCN) Red List?

Hogan: There are potentially species out there that we don't know about, but from the species I do know about there are about two dozen species that qualify as megafishes. To qualify for the project the fish has to be over 2 meters or more than a 100 kilograms (220 pounds). And my estimate is about 70 percent will qualify as threatened with extinction.

CNN: How easy is it to get these fish protected?

Hogan: The first step is gathering the information that you need to list the species according to the criteria of IUCN. And there are a number of criteria so if you have that information about the fish you can list it. Once the species is listed then the chance that someone will take action to protect it increases. It is very rare that someone will protect a species that is not listed. So one species of particular concern to me is this Dog Eating Catfish -- because it is not listed, nobody is doing anything to protect it and it is one of these species that could go extinct. So the point of the project right now is to gather this data which is needed for the listing.

You can find out more about the Megafishes Project at: www.megafishes.org