TOKYO, Japan (CNN) -- For the first time that sumo wrestling's governing body can recall, one of its revered athletes has been nabbed for drug possession. 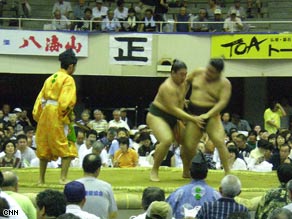 Fans in Japan expect humility and dignity from sumo wrestlers.

Police arrested the Russian wrestler this week after saying they found a third of a gram of marijuana in his wallet -- enough to land him in prison on a diet of forced labor for five years if he's convicted.

It's the latest black eye for a sport closely intwined with Japanese culture and history. Fans have long expected humility and dignity from their sumo wrestlers, so the arrest stunned people in Japan, where the national sport has taken a beating in the last year or so.

First, police charged three sumo wrestlers and their stable master -- a kind of manager --with beating a teenage sumo to death last year. They deny it.

Then Japan's top sumo -- Asashoryu -- apologized on national TV after being caught in an apparent lie. He pulled out of an exhibition tournament, saying he was hurt. But television cameras caught him playing soccer in his native Mongolia days later, apparently without injury.

The Japan Sumo Association suspended Asashoryu -- the first time the country's yokozuna, or top sumo, has received that punishment.

Police say they found marijuana in Wakanoho's wallet on June 24 and arrested him this week after an investigation. The 20-year-old Russian wrester, who stands six feet four inches, has not entered a plea, authorities said. Yet the arrest prompted the Japan Sumo Association to apologize to fans, pledge to investigate and to fire him.

The sumo association said Thursday that Wakanoho's stable master has resigned as an association board member.

Sumo wrestling, which traces it roots back 1,500 years, is struggling not just within its ranks, but in popularity, as well.

Fewer Japanese boys are entering the tough life of sumo, so the Sumo Association is recruiting foreigners like Wakanoho and Asashoryu. Attendance is down at the stadiums, as more Japanese embrace soccer and baseball.

All these struggles may have a silver lining.

"These allegations, be they true or false, this one included, they're all turning points to a more open sumo," says Mark Buckton, a sumo analyst for the Japan Times. "It's good for the sport in the end. It can open up the sport, make them follow modern society."

All About Japan • Asia