(CNN) -- NATO disputes a report published in one of France's major daily newspapers that said French soldiers involved in deadly fighting in Afghanistan this week were struck by NATO airstrikes. 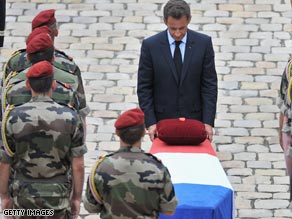 President Sarkozy pays tribute to the fallen troops at a ceremony in Paris.

Ten soldiers were killed and 21 wounded in fighting between the Taliban and French troops near the Afghan capital, Kabul.

"The allegations are unfounded," NATO said in a statement.

NATO's denial came as France held a day of national mourning and a funeral service for the soldiers in Paris. President Nicolas Sarkozy delivered the eulogy and posthumously awarded them several medals.

The account published in Le Monde on Wednesday quoted unidentified soldiers who were injured in the ambush as saying NATO airstrikes missed Taliban targets and hit some French soldiers.

"The NATO airstrikes that were supposed to allow the soldiers under assault to get out of the trap, according to the wounded, missed their target and hit French soldiers, along with other shots fired from Afghan soldiers positioned below," the newspaper reported.

French Defense Minister Herve Morin said the military will thoroughly investigate what happened during the fighting in the Sarobi area of Kabul province, northeast of the capital.

He said there would be no further comment until an investigation has been completed.

The head of the French armed forces, Gen. Jean-Louis Georgelin, said Wednesday that the deaths occurred in the first few minutes of the Taliban attack, which seems to rule out the airstrike as being the cause of the deaths but not necessarily the injuries.

According to the soldiers interviewed by Le Monde, not all of the men who died were killed in the initial ambush. Some died later in the battle as they waited for help to arrive, the newspaper said.

Jean Marie Bockel, French secretary of defense for veterans affairs, said the soldiers "were the victims of an extremely well-prepared and murderous ambush. We should not look here and there for other causes."

The attack on French troops was the deadliest of a flurry of attacks in the country in recent days and occurred during an upsurge of killings this year among U.S. and allied forces in Afghanistan.

Survivors quoted in Le Monde said their reconnaissance unit was under enemy fire for four hours without reinforcements. Radio communications had also been cut between the advance unit and other units in the area, they told the newspaper.

In a statement Thursday, NATO said, "the planes supplying close air support could not engage because French troops were very close to Taliban insurgents and if they had engaged there may have been considerable collateral damage if the bombs had been used."

"None of the wounds sustained by those killed or injured were consistent with air-delivered ordnance," NATO said.

NATO's International Security Assistance Force and the U.S.-led coalition are fighting the Taliban in Afghanistan.

Before this incident, 12 French troops had died in several incidents during the Afghan war, mostly in combat.

U.S. military officials said the United States is aware of the allegations reported by Le Monde but has no information about friendly fire. Washington will help Paris with any investigation if the French request it, the officials said.