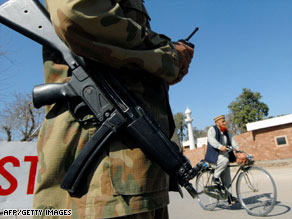 The North West Frontier Province is rife with Islamic extremists and has been the site of recent clashes.

The three passengers inside were unhurt and the car suffered minimal damage, said Lou Fintor, spokesman for the U.S. Embassy in Pakistan.

U.S. officials would not release details on the shooting in Peshawar, referring to it only as a "security incident."

The United States maintains a consulate in Peshawar, the capital of the North West Frontier Province.

Peshawar police said Lynne Tracy, principal officer at the consulate, had left her house and was headed to her office when gunmen in a blue Land Cruiser blocked the car's path and opened fire.

The consulate car carried Tracy, her driver and a bodyguard, police said.

"It was not a direct fire," said Arshad Khan of Peshawar Police. "They just fired at the road. One or two bullets bounced from the road and they hit the engine."

The consulate driver put the car in reverse and took off.

No one immediately claimed responsibility for the attack.

Watch a report on the attack »

In late June, the military launched an offensive in the province -- the biggest push against extremists in the tribal region since the civilian government took power in March. Islamic militants vowed to retaliate.

After taking office in March, Pakistan's new government had tried to negotiate a deal with militants as part of its efforts to bypass military might and achieve peace through talks.

Yet the attacks continued.

On Monday, Pakistan banned the Taliban, which has claimed responsibility for several of the bombings.