(CNN) -- The remote east Indian state of Orissa, historically a tinderbox of Hindu-Christian tensions, erupted in violence this week after gunmen killed a Hindu leader and mobs burned churches in retaliation. 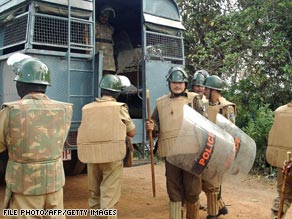 Police have been deployed in the state in the past to quell protests and violence between religious groups.

Pope Benedict XVI "firmly condemned" the fighting and urged the state's residents to "re-establish with the members of the various communities the peaceful cohabitation and the harmony that has always been the distinctive mark of the Indian society."

The Hindu leader, Laxmananda Saraswati, and four others were killed Saturday in the Kandhamal district when up to 30 gunmen barged into a Hindu school and opened fire, Orissa's chief minister's office said.

Authorities have not definitively determined who killed Saraswati, but they detained five Christian people after the incident, said Sukanta Panda, spokesman for the chief minister.

The government said the killings may have been the work of Maoist rebels, but hardline Hindus blamed the Christian minority.

They took to the streets in anger, rampaging through predominantly Christian neighborhoods, ransacking shops and torching houses. They chopped down trees to block roads, making it difficult for police to reach trouble spots. Christian residents fought back.

By Wednesday, an eerie calm prevailed, but both Hindu and Christian leaders said they were bracing for the worst.

"The state is a mute spectator to the violence that has been unleashed in the Christian community," Joseph D'Souza, president of the All India Christian Council, said Wednesday.

Amit Sharma of the hardline Vishwa Hindu Parishad (World Hindu Council) said Hindu people in the area had taken the death of the Swami (religious leader) "very seriously, and now they are going to pay them back."

Orissa, on the east coast of India, is a poor state with a population of about 36.7 million: 94 percent are Hindu, with little more than 2 percent Christian.

However, for thousands, converting to another religion -- such as Christianity or Islam -- is the only way out of the confines of Hinduism's centuries-old complex caste system.

The caste system dictates a Hindu's lot in life, elevating some to positions as priests and labeling others as "untouchables."

Some Hindu groups accuse missionaries of bribing or forcing Hindus into converting.

"There is no forcible conversion," said D'Souza of the All India Christian Council. "This is nothing but pure political hate propaganda against the Christians when the root problem is, of course, caste oppression."

The simmering anger sometimes boils over, with deadly consequences.

In 1999, a Hindu mob burned to death an Australian missionary, Graham Staines, and his two children while they slept in their car.

D'Souza said Saraswati "piloted" the Christmas communal violence and had carried out a "vicious campaign against the Christians."

"He was doing a good job of propagating the bright points of Hinduism, and the missionaries were not able to convert the tribal people as effectively as they were doing previously," Sharma said. "So they decided to do away with him."

Investigators, however, have raised the possibility that Maoists rebels may be to blame.

However, Hindu groups insist Christians was behind Saraswati's death.

"It is clear that the church killed the Swami," said the Hindu council's general secretary, Praveen Togadia. "The rest of what happened is something the government needs to investigate and tell the people of India."

On Monday, Hindu hard-liners declared a general strike, prompting banks and markets to close across the state.

Mourners marched to a Christian orphanage and set it on fire. A 20-year-old woman who was teaching children burned to death, Panda said.

The next day, armed Hindus and Christians fired at each other, resulting in four deaths, he said.

Both sides said the communal violence had destroyed Christian churches and Hindu temples.

The violence spread to the state capital, Bhubaneshwar, about 140 miles (225 km) away.

Father Pius Fernandes said mobs threw stones at a children's school and ransacked a nearby college.

"I would say the violence is seven times worse [than in December]," he said. "I mean, the government is trying its best. But it's like a mad frenzy. They are just destroying everything."

CNN's Melissa Gray in London and Bharati Naik in New Delhi contributed to this report.