Suit: KBR forced Nepali men to work against will in Iraq

WASHINGTON (CNN) -- A lawsuit filed in California against Kellogg, Brown and Root on Wednesday alleges the company and its subcontractor were involved in a human trafficking plan that forced Nepali men to work against their will in Iraq. 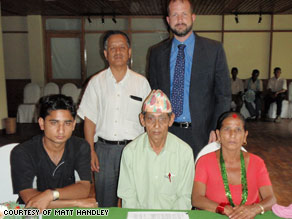 The lawyer and relatives of men who were employed by KBR and allegedly sent to Iraq without their consent.

The men, between the ages of 18 and 27, were recruited in Nepal and told they would be doing work in hotel and restaurant kitchens in Amman, Jordan, but were sent instead to Iraq to work at a U.S. air base, according to the lawsuit.

The lawsuit alleges KBR, based in Houston, Texas, and Daoud & Partners, a Jordan-based subcontractor, engineered the trafficking scheme.

A KBR spokeswoman would not comment directly on the allegations but released a statement defending the company.

"KBR has not yet seen the lawsuit so it is premature for us to comment at this time. The safety and security of all employees and those the company serves remains KBR's top priority. The company in no way condones or tolerates unethical or illegal behavior," KBR spokeswoman Heather Browne said in a statement e-mailed to CNN.

"Each employee is expected to adhere to the company's Code of Business Conduct and complete ethics training, which includes TIPS (Trafficking in Persons) information," Browne continued.

Efforts by CNN to reach Daoud were unsuccessful.

When the Nepali men arrived in Jordan, according to the lawsuit, the contractors took their passports and drove them into Iraq.

Mathew Handley, a lawyer with Cohen, Milstein, Hausfeld & Toll, which filed the lawsuit, said about 70 Nepali men were driven into Iraq in a large convoy of civilian vehicles.

One of the lead vehicles was ahead of the convoy and was stopped by insurgents posing as Iraqi Police. Twelve of the Nepali men were taken by the insurgents and later killed.

"As the men were being transported to Iraq, a car containing twelve of the men was stopped by members of the Ansar al-Sunna Army, an insurgent group. The 12 men in the car were taken hostage and executed by the insurgents," according to a statement on the law firm's Web site.

A 13th man, Buddi Prasad Gurung, was not kidnapped and arrived at the U.S. Al Asad air base in western Iraq in August 2004. Gurung worked in a warehouse managed by KBR and was released 15 months later by the company, according to the law firm.

Gurung and the families of the 12 men who were killed have brought the lawsuit. Handley says the other Nepali workers who were sent to Iraq with Gurung did not come forward for the lawsuit after they were eventually released from KBR.

"Their families went deep into debt to arrange the jobs, which they hoped would lift them out of poverty," according to the lawsuit.

The case garnered the attention of the Department of Defense Inspector General's office after a number of news reports about KBR involvement in trafficking. The department concluded an investigation in April 2006.

"The primary finding concluded that the U.S. Government had no jurisdiction over the persons, offenses, or circumstances that resulted in the Nepalese deaths," according to the final report.

The report also concluded that the events happened "before starting their employment with KBR."

However, the case led to increased awareness and enforcement of trafficking laws by the U.S. military.