(CNN) -- An alleged terrorist leader suspected of plotting the bombing of a Philippine superferry more than four years ago, killing at least 116 people, has arrived in Manila after his arrest in Bahrain, a Philippine justice official said Saturday. 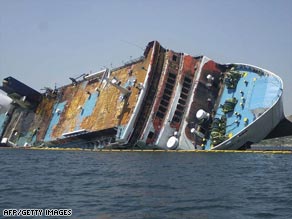 Authorities in Bahrain arrested Ruben Pestano Lavilla Jr. last month, said Ricardo Blancaflor, undersecretary at the Department of Justice. Lavilla was deported Saturday to Manila, where police arrested him and briefly paraded him in front of local media crews before locking him inside police headquarters, Blancaflor said.

Lavilla is one of the top ideologues in the Rajah Solaiman Movement, a group of former Christians who converted to Islam and claim affiliation with the al Qaeda-linked regional terrorist groups Jemaah Islamiyah and Abu Sayyaf, Blancaflor said.

Blancaflor said authorities suspect Lavilla helped plot the bombing of a superferry near Manila on February 27, 2004, in which at least 116 people died. They believe Lavilla also helped plan the bombing of a bus behind the Intercontinental Hotel in Manila on February 14, 2005, an attack that killed at least four people and came to be known as the Valentine's Day Bombing.

The bus bombing was part of a trio of attacks that happened that day. The two other blasts, both fatal, happened in the southern cities of General Santos and Davao.

Blancaflor said he suspects Lavilla was also involved in the planning of several bomb attacks on the U.S. Embassy in Manila, all of which were thwarted by Philippine police.

In describing Lavilla's arrest in Bahrain, Blancaflor said only that police there arrested him as they were enforcing U.N. Security Council resolution 1276, which imposed air travel and financial sanctions on the Taliban.

Jemaah Islamiyah aims to create a Muslim "superstate" across much of Southeast Asia. Authorities blame the group for the Bali, Indonesia nightclub bombings of 2002, which killed more than 200 mostly Western tourists.

The group is also suspected of subsequent attacks on the Australian Embassy and J.W. Marriott hotel, both in the Indonesian capital, Jakarta.

The Abu Sayyaf group is one of several Islamic militant groups fighting the government in and around the southern Philippine island of Mindanao.