ISLAMABAD, Pakistan (CNN) -- The chairman of the U.S. Joint Chiefs of Staff arrived in Pakistan on Tuesday amid tensions between the two countries about U.S. military incursions into Pakistan's tribal areas. 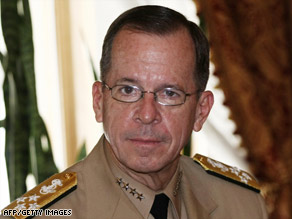 Relations between the United States and Pakistan have been tense since the U.S. military sent ground forces into Pakistan's tribal regions earlier this month without Islamabad's permission.

The incident prompted the Pakistani government to summon the U.S. ambassador to voice its disapproval, as well as deliver a "demarche" (a diplomatic petition or protest) through its ambassador in Washington.

Last week, Kayani announced no foreign forces will be allowed to conduct operations inside Pakistan in light of the "reckless" U.S. military ground operation.

Pakistan army spokesman Major Murad Khan said the driver of the suicide car bomb tried to ram the gate of a military checkpoint at a school in the Swat District.

Troops shot from the check-post before the attacker reached his target, Khan said. The car exploded, and militants shot back as they ran away.

The incident happened at a time when Muslims break their fasts in the month of Ramadhan.

Swat militants loyal to banned religious leader Maulana Fazlullah have claimed responsibility for the attack, according to the military. The suicide attacker in the car was killed. A few others were also believed to have been killed or injured, but Khan said there were no confirmed numbers because it was dark and the militants removed the bodies of their dead and wounded.

The explosion occurred at the Tutano Bandai school of Tehsil Kabal in Swat District in the North West Frontier Province.

CNN's Jamie McIntyre and Zein Basravi contributed to this report.

All About Michael G. Mullen