ISLAMABAD, Pakistan (CNN) -- More than 1,300 pounds of explosives were packed into a construction truck that detonated outside an Islamabad hotel, killing 57 people, including two Americans and a diplomat, officials said Sunday. 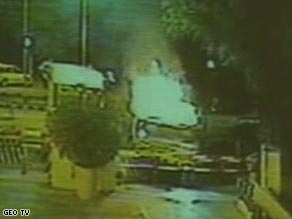 A truck burns at the gate to the Marriott Hotel in Islamabad before a larger, deadly explosion Saturday.

Pakistani Interior Minister Rehman Malik said the Saturday attack at the Marriott Hotel "is the biggest attack, volume-wise" in Pakistan in seven years.

Two American military personnel who worked for the U.S. Embassy in Islamabad were among those killed, the U.S. military said. A Lithuanian and the Czech Republic's ambassador to Pakistan, Ivo Zdarek, also were among the fatalities, police superintendent Sheikh Zubair said.

The suicide truck blast injured 266 people, including 11 foreigners, according to Malik.

Watch guards scatter after an explosion »

British Airways temporarily suspended its flights to Islamabad as a result of the security situation, according to an airline spokeswoman who did not want to be named. A Sunday night flight has been canceled, and the airline is reviewing its operations for later in the week.

British Airways operates at least three flights a week to the Pakistani capital out of London's Heathrow Airport.

At a news conference in Islamabad on Sunday, Pakistani authorities released security video of the blast, showing a small explosion inside the truck before the larger, deadly explosion. Watch the truck bomb caught on tape

A small cloud of smoke appears above the truck, which is engulfed in flames minutes later. One of the security guards tries to put out the fire with a hand-held extinguisher, to no avail. The guards then walk away, and the camera freezes on the burning truck.

No arrests have been made in connection with the attack, Malik said Sunday, adding that militants in Pakistan's tribal regions are suspected of orchestrating the attack.

"I am not in a position to tell you who has done it, but [in] all the previous investigations, all the roads have gone to South Waziristan," he said.

South Waziristan is one of Pakistan's seven tribal areas where Taliban and al Qaeda militants are active.

At the bombing site, video showed a deep crater in the pavement where the bomb detonated. More than a dozen cars were reduced to twisted steel.

The crater was 24 feet deep and nearly 60 feet wide, Malik said. The blast also caused a natural gas leak that set the top floor of the five-story, 258-room hotel on fire, police said. The blaze quickly engulfed the entire structure.

Most of the fatalities appeared to be drivers, who were waiting with their cars outside the Marriott, and hotel security guards, Geo TV's Hamid Mir said.

The hotel, where a standard room costs more than $300 per night, is near the compound that contains the Parliament building, the prime minister's house, the Supreme Court and the presidency.

The blast occurred about 7:50 p.m., after the breaking of the fast during the holy month of Ramadan, Malik said.

Trees were felled by the explosion, which occurred hours after newly elected President Asif Ali Zardari addressed a joint session of Parliament and promised to root out terrorism.

Watch the scene the morning after the blast »

A few hours after the attack, Zardari addressed the nation on television, saying he knows the pain of terrorism after his wife, former Prime Minister Benazir Bhutto, was killed in December on the campaign trail.

"My heart cries tears of blood. I can understand your pain. I want to ask you to turn this pain into your strength," he said, describing extremism as "a cancer, which we will finish."

"In the holy month of Ramadan, no Muslim can act in this way. These people are not Muslims," he said. "I appeal to all democratic nations to help us get rid of this menace."

The Marriott, a Western brand-name hotel, has been the site of attacks in the past.

See where the attack occurred »

Malik said authorities had received a threat against Parliament two days ago.

"We had taken all security measures," he said. "There was heavy security in the city."

Located near the diplomatic section of the city and heavily guarded by police and the military, the hotel is popular among tourists and had been packed Saturday night. Any vehicle entering the facility is searched, its underside checked for bombs, before it is allowed to pass through heavy steel gates.

The British High Commission in Islamabad said six British nationals -- five adults and one minor -- were injured in the attack, including three commission members. A Pakistani staff member of the commission was also injured, it said.

A spokeswoman for the German Foreign Ministry said six Germans in the hotel were slightly hurt in the attack, and that all embassy personnel were accounted for.