ISLAMABAD, Pakistan (CNN) -- Police tightened security at airports across Pakistan Thursday after receiving reports of a possible suicide attack at the international airport that serves Islamabad. 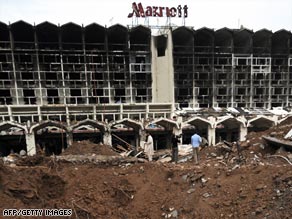 Pakistan's capital was rocked by a suicide attack on the city's Marriott Hotel at the weekend.

Officers emptied the parking lot at the Benazir Bhutto International Airport, on the outskirts of Islamabad, said Parvez George of the country's Civil Aviation Authority.

Flights were going out of the airport, but police cleared the terminal building of the large crowds that usually gather to see relatives arrive or depart, George said.

Muhammad Asghar of Islamabad Police told CNN that authorities placed the airport on high alert after intelligence reports indicated it was under threat of an attack.

The country's capital city is on edge since a deadly blast Saturday night at the Marriott Hotel. The explosion killed more than 50 people, including two U.S. military personnel and the Czech ambassador to Pakistan.

The bombing wounded more than 250 and sparked a fire that left the hotel in ruins.

On Thursday, the Danish intelligence service said one of its employees, Karsten Krabbe, was among the victims of the blast.

Krabbe, a 53-year-old married father of two, was a security adviser at the Danish Embassy in Islamabad, which was targeted by a suicide bomber in June. That attack killed six people and wounded more than 20.

"Karsten Krabbe lost his life in a cowardly and ruthless terror attack," the Danish intelligence service said in a statement.

Reacting to the Saturday's attack, the U.S. government barred employees from major hotels in several Pakistani cities, the U.S. Embassy in Pakistan said.

The Embassy in Islamabad added Lahore on Wednesday to a list of three other cities in which U.S. personnel are no longer allowed to visit or stay in major hotels.

The Embassy took the measures because of general security concerns, said spokesman Lou Fintor Thursday. He did not comment on a specific threat.

In addition to the hotel restriction, the Embassy temporarily suspended visa and other routine consular services for Thursday and Friday. It said it will make available emergency services for U.S. citizens who need passports or are arrested.

And an advisory reminded Americans in Pakistan to avoid crowds and demonstrations and to keep a "low profile." It said Americans should vary times and routes while traveling to avoid setting patterns.

And it said a travel warning issued on August 7 still stands: U.S. citizens should defer nonessential travel to Pakistan due to continuing security concerns.