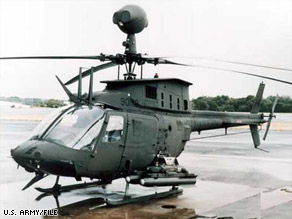 Pakistan says it shot at two U.S. OH-58D helicopters like this one pictured in a U.S. Army photo.

The U.S. Army OH-58D Kiowas, part of NATO's International Security Assistance Force mission in Afghanistan, were patrolling the Pakistani-Afghan border when the Pakistani military fired on them, NATO and U.S. officials said.

No injuries were reported in the five-minute incident.

Smith and other U.S. officials said the helicopter crews did not fire back.

But the Pakistanis disagreed, asserting in a written statement that the helicopters "returned fire" after the initial shots were fired.

"The helicopters passed over our border post and were well within Pakistan territory" at the time that "security forces fired anticipatory warning shots," the Pakistani statement said.

After the shots were fired, "the helicopters returned fire and flew back."

The Pakistani statement did not mention exchanging fire with ground troops and did not identify the shots as flares, as Zardari did in New York in an appearance with U.S. Secretary of State Condoleezza Rice.

"They are flares," he said in response to a question asking why the Pakistani military was firing on NATO helicopters. "Just to make sure that they know they crossed the border line."

Asked if such warnings will continue, he replied, "Sometimes the border is so mixed that they don't realize that they crossed the border."

Rice, off camera, agreed that "the border is very unclear" and "inhospitable."

Pentagon spokesman Bryan Whitman reiterated the United States' stance that the two helicopters were over Afghan territory. "The Pakistanis need to provide the U.S. a reason to why this took place," he said.

The ISAF issued a news release saying that "ISAF helicopters received small-arms fire from a Pakistan military checkpoint along the border near Tanai district, Khowst."

"At no time did ISAF helicopters cross into Pakistani airspace." The ISAF did not mention ground troops or say whether the helicopters returned fire.

Both the ISAF and Pakistani military said they are working to resolve the issue.

"We will not tolerate the violation of our sovereignty and territorial integrity by any power in the name of combating terrorism," he said in his first speech to Parliament as president.

His remark followed a similar declaration from Pakistan's military chief, Gen. Parvez Kayani, who said this month that Pakistan's territorial integrity "will be defended at all cost, and no external force is allowed to conduct operations."

A senior defense official in the Pentagon said the Pentagon is trying to determine the details of Thursday's incident.

"What we don't know if this was just a case of trigger-happy members of the Frontier Corps," the official said, "or whether in fact the Pakistani military does have orders to fire on our helicopters."

"We are confident our helicopters were on the Afghan side of the border, and we have no report they fired back," the official added.

Top U.S. commanders will be talking to the Pakistani military about the incident to determine if there was a misunderstanding and to ensure it doesn't happen again, a U.S. official familiar with details of the incident said.

The official said this is the first verified incident of U.S. troops being fired upon by Pakistani forces. There were at least two previous reports in recent days out of Pakistan about similar incidents, but the United States has said neither of those reports was true.

All About Pakistan • The Pentagon • Asif Ali Zardari