KABUL, Afghanistan (CNN) -- Fighting raged in Afghanistan over the weekend, with a suicide bombing slaying six people, a NATO-led soldier and an Afghan police officer dying in an "altercation," and troops killing several insurgents in battles, authorities said. 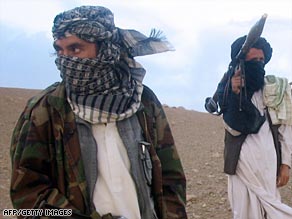 Fighting between the Taliban and NATO forces continues to rage in Afghanistan.

Along with the deaths, at least 17 people were wounded, and ISAF condemned the assault. Four of those killed were Afghan border police officers, ISAF said. The location is in southern Afghanistan.

The ISAF soldier and an Afghan police officer were killed after seven people were apprehended in connection with a roadside bombing in Paktia province on Sunday that targeted an Afghan National Police and ISAF patrol. The location is in eastern Afghanistan.

"The detained civilians were then transferred to the ANP station at the Jaji District Center. While at the district center, there was an altercation during which an ANP officer and one ISAF soldier were killed," ISAF said in a Monday news release.

The U.S.-led coalition on Monday reported fighting between U.S. and Afghan troops and insurgents over the last two days -- Sunday in Kandahar province and Saturday in Helmand province. "Several insurgents" were reported killed in both incidents.

Two insurgents died in fighting on Friday in another southern region -- Zabul province, the coalition said on Monday.