WASHINGTON (CNN) -- The commander for NATO forces in Afghanistan said Wednesday that more military presence is "needed as quickly as possible." 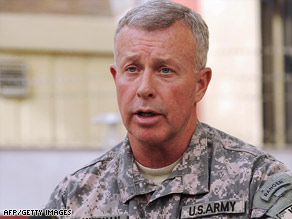 Gen. David McKiernan said the additional military capability is needed because of "an increased number of fighters" coming into Afghanistan from Pakistan's lawless tribal regions.

"It's a significant increase from what we saw this time last year," he said at the Pentagon.

"We're facing a tougher threat right now, especially in the east where we have the U.S. division," he said. "And so the additional military capability [is] needed as quickly as possible."

He said what's necessary includes "boots on the ground" as well as support such as "helicopters, increased intelligence assets, logistics, transportation and so on."

Just over a week ago, Defense Secretary Robert Gates said that a Marine battalion will head to Afghanistan in November and an Army brigade in January, but no more forces will be available for deployment to Afghanistan until spring or summer of 2009.

The week before Gates' announcement, McKiernan had asked for four more brigades -- three more than the one approved to go in January. Three brigades add up to as many as 12,000 troops.

The defense secretary, speaking before the Senate Armed Services Committee last month, expressed caution about adding too many troops in Afghanistan.

"I think we need to think about how heavy a military footprint the U.S. ought to have in Afghanistan," he told the committee. Instead, Gates said, there should be a focus on increasing the size of the Afghan army.

McKiernan, who took command of NATO's International Security Assistance Force earlier this year, said his request of an additional 3,500 people to train the Afghan army and police is still under review.

McKiernan noted that he is "cautiously optimistic" regarding Pakistan's military operations against Taliban and al Qaeda fighters inside its borders.

"What we're seeing is Pakistani leadership taking on a deteriorated militant sanctuary in the tribal areas that has deteriorated over last several years," he said.

McKiernan said it is "probably too early" to see if Pakistan's military clampdown in its tribal areas has had any effect on stemming militant activity in Afghanistan.

"We're watching those very closely to see if there's a cause and effect with the strength of the insurgency on the Afghan side of the border," he said. "But we think that's a positive step that they are taking on those militant sanctuaries."

All About Afghanistan • Pakistan • NATO