NEW DELHI, India (CNN) -- A Maoist group has claimed responsibility for the killing of a Hindu leader, whose death sparked a wave of Hindu-Christian riots in southern India. 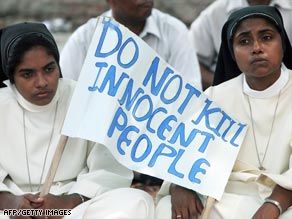 Indian nuns protest against the recent violence which has seen Christians attacked.

Sabyasachi Panda, the head of the Communist Party of India-Maoist, told reporters of two private television stations that his group was behind the Hindu leader's death, the country's national news agency said Sunday.

The leader, Laxmananda Saraswati, preached the tenets of Hinduism to the tribal people of the state. And Panda said Maoists had earlier warned him to desist from "such works" or face consequences, PTI said.

Panda said the Maoists killed Saraswati because he was "spreading social unrest" in the tribal area, the news agency said.

The Indian government has consistently claimed the shooting death may have been the work of Maoist rebels.

He and four others were killed in August when 20 to 30 gunmen barged into a Hindu school and began shooting.

Afterward, police arrested five Christians as suspects in the case.

The hardliners held up the arrests as proof of Christian complicity. They took to the streets in anger, rampaging through predominantly Christian neighborhoods, ransacking shops and torching houses.

A Christian orphanage was set on fire. A 20-year-old woman, who was teaching children inside, burned to death.

Christian resident fought back, and the clashes spread.

The communal violence left churches and temples razed to the ground. More than 20 people died, and hundreds were arrested.

Even after the Maoists' claim of responsibility, some fundamentalist Hindu groups blamed Christians for the death.

The hardline Vishwa Hindu Parishad, or World Hindu Council rejected the claim saying the communist group -- known as 'Naxals' -- did not have a religious agenda.

"Have the Maoists started fighting in the name of God now?" VHP leader Subansh Chauhan was quoted as saying by CNN-IBN, CNN's sister network.