A house divided: Estranged couple's home cut in half

(CNN) -- A Cambodian couple who separated after 40 years of marriage may have taken things too literally when it came to splitting their assets: 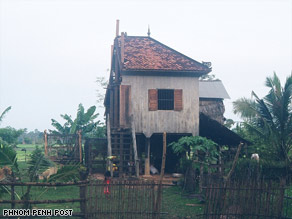 A couple who separated after 40 years of marriage split their house in two -- literally.

The husband cut the house in two.

"It is the strangest thing I've ever seen," said May Titthara, who wrote about the case for The Phnom Penh Post, an English-language newspaper in the Cambodian capital. "People there never saw this happen in a divorce. It is very interesting for them."

The husband and wife had been living together in the house in a village in the Prey Veng province of southern Cambodia, roughly 50 miles (80 km) from the capital.

The couple would not talk to the newspaper, but the village chief told May Titthara that the husband was angry because his wife wouldn't tend to him when he was ill.

Last week, the husband and his friends moved his belongings to one side of the house -- and sawed and chiseled it off, said the reporter, who interviewed the village chief and neighbors.

The couple also divided their property into four sections: for themselves and their two children.

Because the couple side-stepped the provincial courts when they parted ways, their unusual resolution could pose a problem later, said Prak Phin, a lawyer for Legal Support for Child and Women in the province.

"This was a not a legal divorce. It never went to the court," he said. "If they have disagreements in the future, they will not have a legal (recourse)."

The man moved his part of the house to his parents' property, May Titthara said. He lives with his parents, while the wife continues to reside in her precariously perched, upright half.