One dead in Thai-Cambodia border clash 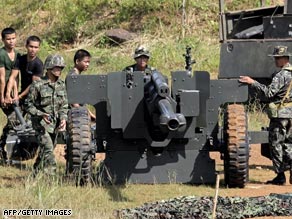 Two Thai soldiers and four other Cambodian soldiers were also wounded in the half-hour-long skirmish near the Preah Vihear temple, according to Thai Army Lt. Gen. Wiboonsak Neeparn.

The two countries have disagreed for months over whether some territory around the ancient temple forms part of Thailand or Cambodia.

Speaking by phone to a local television station, the army official said the shooting took place in an area where Cambodian Prime Minister Hun Sen issued an ultimatum Tuesday for Thai soldiers to leave.

Col. Sansern Kaewkumnerd, a Thai Army spokesman, said he did not think the fighting will spread to other areas. He said the conflict will be resolved through negotiations.

Both countries posted troops in the area after the United Nations approved Cambodia's application in July to have the 11th-century temple listed as a World Heritage Site.

The temple sits atop a cliff on Cambodian soil but has its most accessible entrance on the Thai side.

Opposition parties in Thailand used the issue to attack the government, which initially backed the heritage listing.

Cambodian Prime Minister Hun Sen, who has been in power since 1985, portrayed the U.N. recognition as a national triumph in the run-up to the country's general elections.

The current flare-up began July 15, when Cambodian guards briefly detained three Thais who crossed into the area. Once they were let go, the three refused to leave the territory.

Cambodia claims Thailand sent troops to retrieve the trio and gradually built up their numbers. Thailand denies that, saying its troops are deployed in Thai territory.

A spokesman for the Royal Thai Air Force told CNN Wednesday that it has placed its entire fleet of fighter jets on stand-by.

A military transport aircraft is also ready to evacuate Thai citizens from Cambodia, but will need the permission of Cambodian authorities to cross the border.

All About Thailand • Cambodia