NEW DELHI, India (CNN) -- More than a dozen trucks loaded with fruits, spices and other goods Tuesday crossed the line dividing Kashmir as India and Pakistan opened a symbolic trade route in the disputed region for the first time in more than 60 years. 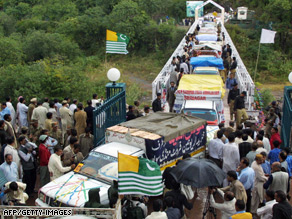 Kashmiris watch as Indian trucks cross into the border town of Chakothi in Pakistani-administered Kashmir.

To cheers and band music, the first trucks rumbled from the Pakistani side across a white bridge to a brightly decorated trade center festooned . Apple-laden Indian trucks heading the other way were also warmly welcomed.

It is hoped the move will ease tensions in the troubled Himalayan region, which has been a conflict flashpoint between nuclear-armed neighbors India and Pakistan who both lay claims to the territory.

Watch more about the historic day »

"We are sending the sweet Kashmir apple as the first consignment. This is sure to sweeten the relation between the two neighbors. The beginning of the trade between the two Kashmirs will further improve the relations and lead to a peaceful resolution of the bitter problem," he said.

The trucks were subjected to thorough security checks before they crossed the bridge, one of the few crossing points in the heavily militarized 742-kilometer (460-mile) Line of Control, the de facto frontier that divides the region.

Kashmir has been a major source of dispute between India, and Pakistan since the two countries were partitioned at the end of British rule in 1947. Muslim Kashmiris sided with Pakistan to the north, while the Hindu south joined India.

For the past 18 years, Kashmir has been wracked by a bloody separatist campaign. Authorities say up to 43,000 people have died, but rights groups and non-governmental organizations put the death toll at twice that.

Violence had dropped off since the countries began a peace process in 2004, but it surged after the state government in Indian-controlled Kashmir announced plans in June to donate land for a Hindu shrine.

Muslim protests following the decision prompted a government U-turn that triggered Hindu demonstrations calling for it to be restored. Subsequent violence left 40 dead and hundreds wounded.

It is hoped Tuesday's route opening will bolster the peace agreement and combat lingering mistrust between India and Pakistan. A bilateral cease-fire has been holding in the region for more than four years.

A bus service connecting the divided Kashmir began amid much fanfare in 2005 but struggled under the weight of elaborate security checks and stifling bureaucracy.

"This is a great emotional moment, as it brings to mind my grandfather, who used to drive lorries on this road," said Muzhar Hussain Naqvi, who drove the leading Pakistani truck.

CNN's Sara Sidner and Mukhtar Ahmad contributed to this report

All About Pakistan • India • Jammu and Kashmir