Eco-horror films shocking us into action 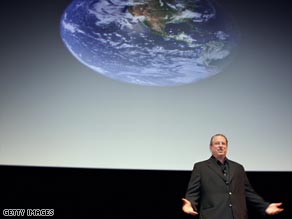 Al Gore's 'An Inconvenient Truth' presented eco-disaster as both shocking and a call to arms.

Unlike most horror films these movies aren't fiction, they are serious documentaries tackling the big issues of our time. But the message is still: Be afraid.

The most recent addition to the scene is French director Irena Salina's, "Flow", which shows how the effects of climate change coupled with widespread privatization of the world's fresh water supply has created a world water cartel with grim consequences for us all.

Wired magazine called it "the scariest movie at the Sundance Film Festival".

The film is a call to arms to resist the quiet corporate takeover of the stuff of life, and as such it taps into a widespread uncertainty about the way the world seems to be heading.

There is a lot of fear around now as the crunch on resources and looming threat of catastrophic climate change creates a deep and profound urban malaise.

That fear is finding its voice in these new documentary films that explore our future - and most cast a pall of gloom over life on this planet if we don't change our ways quickly. Feel-good these movies aren't.

The film that kick-started the trend was the Oscar-winning "An Inconvenient Truth", in which Al Gore stands like a don in a lecture theatre delivering a power-point style talk about how global warming will affect the planet, interspersed with personal meditations on nature.

The film made $49 million at the box office - $24 million in the U.S. alone - which is not bad business for a film without action or special effects.

Hot on his heels, Leonardo DiCaprio's "The 11th Hour" presented a similar -- if markedly more mawkish -- eulogy for a doomed planet, the bleakness of the message given a slight lift by the familiar presence of the actor.

Despite -- or perhaps because of -- a perceived "dumbing down" of TV, in increasingly complex times cinema-goers seem more than willing to pay to be educated, rather than just entertained.

The mass-market for serious films had been proven by Michael Moore with "Bowling for Columbine" and "Fahrenheit 9/11", which made $58 million and $220 million respectively.

Movies that help make sense of the world

Britain's much-loved broadcaster Sir David Attenborough released two films, "Are We Changing Planet Earth" and "Can We Save Planet Earth," both of which were screened in prime-time slots on BBC 1, the UK's main terrestrial channel.

The calmness of his delivery in marked contrast to the seriousness of the message.

"The Day After Tomorrow" proved that climate change could be a blockbuster, even if it did sacrifice science to meet the demands of an action film.

Popular concern about global warming has acted as a springboard and fired interest in other related issues.

The theory of "peak oil" was made a star in "A Crude Awakening," "The End of Suburbia" and "Escape from Suburbia", all of which were slow-burning underground hits that are still found showing at cinemas and film clubs long after their original release.

Social issues, particularly in the developing world, have also been documented in recent years.

"Black Gold" reported on the lives of the impoverished Ethiopian farmers who grow the coffee we enjoy and their search for a fair price.

The next film by Indian director Shekhar Kapur (who made "Bandit Queen") is called "Paani", about how the depletion of groundwater in India to slake the thirst of its megacities is causing a loop of famine in rural areas leading to greater migration to the cities.

Of course, the climate change deniers have been busy with their cameras as well.

"The Great Global Warming Swindle" challenged the scientific consensus that climate change was caused by humanity -- instead arguing that fluctuations in the sun are responsible.

The film was welcomed by skeptics but greeted by a hail of criticism from scientific bodies, including two of the scientists featured in it, Sir David King and Carl Wunsch, who claimed that they had been misrepresented.

British media regulator Ofcom ultimately backed complaints by the men and ruled that part of the film had breached rules on "due impartiality".

By far and away the majority support the view that humanity has a role in creating global warming. But even in the face of potential catastrophe the environmental movement is not without its feel-good hits.

"March of the Penguins", which follows a family of penguins across the ice, was a surprise success, in which many felt they had found a philosophical subtext about the importance of family and self-sacrifice.

"Winged Migration" was a beautifully-shot film showing the immense and incredible journeys undertaken by birds.

David Attenborough's "Planet Earth" series reached new heights with its stunning cinematographic depictions of life on Earth. Both of these films create a profound feeling of awe of the natural world, underpinned by a sense of its fragility.

While viewers might lose themselves in the beauty of it all, they leave the movies with a creeping sense of what is at stake.

But while the market for green documentaries is growing, concern for the environment in film is in some ways nothing new.

Ecology has formed the basis of many Hollywood plots in one way or another for decades, with films like "Ferngully", "Erin Brockovich", "Silkwood" and "Gorillas in the Mist" all fictionalizing issues around pollution and conservation.

Many of the classic horror films from the 1950's onwards -- from "Godzilla" to "Return of the Living Dead" -- featured a plot based on humankind facing the consequences of an arrogant approach to nature.

We've always felt a link with the natural world and always felt uneasy about our relationship with it, and that's found expression at the cinema.

But until recently we haven't really engaged with those feelings. What marks the new generation of films is their seriousness. They are challenging, inspiring, even. They ask their audiences not just to react but to act as well and actually make change happen.

Perhaps it is with that message that these often bleak horror films strike a note of real hope.

All About Nature and the Environment • Movies • Global Climate Change