WASHINGTON (CNN) -- About 30 U.S. military personnel are training members of Pakistan's Frontier Corps on how to fight Taliban and al Qaeda militants in Pakistan's tribal regions, according to several U.S. military sources. 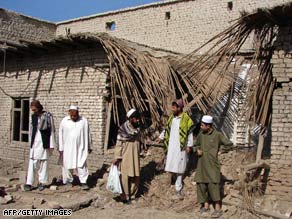 The Pakistanis trained by the U.S. contingent -- which includes Army Special Forces troops -- will in turn become trainers for Frontier Corps troops on the front lines fighting the militants, the sources said.

Pentagon spokesman Geoff Morrell said on Wednesday that U.S. military trainers have been in Pakistan and the mission "has been stepped up, but it still remains very, very small."

"But the hope is that the more trainers we train, the more effective they will be in training their forces and the more capable forces will then be able to take the fight to the militants in the tribal areas where they operate," Morrell said.

The mission comes as the U.S. military and the Pakistanis confer about how to train, arm and equip some tribal militias in the fight against militants in the tribal areas.

Members of the Frontier Corps are ethnic Pashtuns recruited from Pakistan's tribal region. They are on the front lines in the fight against militants along the Afghan border but they've long had a reputation of being poorly trained and underfunded.