(CNN) -- A state-run Chinese newspaper expressed relief Monday that senior Japanese officials had dismissed the country's air force chief after he denied Japan's aggression before and during World War II. 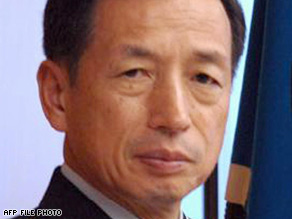 Gen. Toshio Tamogami lost his job as chief of staff for Japan's Air Self-Defense Force, the Ministry of Defense said, after saying in an essay that "it is certainly a false accusation to say that our country was an aggressor nation."

Japanese troops invaded China in 1937 and were widely accused of gross human rights abuses, including raping tens of thousands of girls and women and killing several hundred thousand others in what has come to be called "The Rape of Nanking." Imperial Japan also invaded several other Asian nations, leading to the death and misery for an untold number.

"The denial of the aggression history by Toshio Tamogami comes in as an element of disharmony," the state-run China Daily said a commentary Monday. "Yet, as long as the Japanese government has a right attitude to this question, the smooth development of ties between the two neighbors will not be derailed by such discordant notes."

Japan controlled Korea from 1910 to 1945. Its military is accused of forcing roughly 200,000 women, mainly from Korea and China, to serve as sex slaves -- they were known euphemistically as "comfort women" -- for soldiers in the Imperial Army.

"His claim is distorting history," the statement said. "International friendly relations are based on repentance for past wrongdoings and learning a lesson from history,"

Several Japanese leaders have apologized in recent years for past Japanese aggression.

In 2005, then-Prime Minister Junichiro Koizumi apologized for his country's role in World War II on the 60th anniversary of the war's end. He vowed Japan would never again take "the path to war."

Japan agreed to surrender on August 15, 1945, after U.S. planes dropped atomic bombs on the cities of Hiroshima and Nagasaki. The formal surrender was signed September 2.

In 1995, on the 50th anniversary of the war's end, then-Prime Minister Tomiichi Murayama also expressed Tokyo's deep remorse and heartfelt apology for the damage and suffering it inflicted on its Asian neighbors.

And in 2001, Koizumi apologized for Japanese treatment of Koreans during its occupation of the Korean peninsula during the first half of the 20th century.

In a statement, Koizumi acknowledged the "enormous damage" inflicted by Japan's military "by colonization and invasion" during the conflict.

"We must take this historical fact of such very sincerely, and I would like to express keen remorse and heartfelt apologies," Koizumi said. "I would like to also express our deep condolences to the victims inside and outside of Japan during World War II."

At the height of the conflict, much of southeast Asia, China and the Pacific islands were in Japanese hands.