THIMPHU, Bhutan (CNN) -- Dance performances, archery and traditional sports -- such as snatching of the caps and pillow fights over a tub of cold water -- capped the three-day celebration in Thimphu of Jigme Khesar Namgyel Wangchuck's coronation as Bhutan's king. 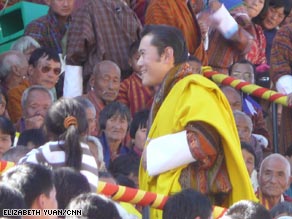 In his coronation address Friday, the 28-year-old monarch referred to gross national happiness, the guiding philosophy first promoted by his still-living father, Jigme Singye Wangchuck, as the alternative measure of development to gross national product.

"Our most important goal is the peace and happiness of our people and the security and sovereignty of the nation," he said, adding that his deepest concern was the loss of Bhutan's "fundamental values" and character in a changing world.

The Buddhist nation opened to tourism only in 1974, the year of the last coronation, when the former king became the world's youngest monarch at the age of 17.

Two years ago, Jigme Singye Wangchuck, then 50, abdicated to his son after setting the nation on the path to democracy with a constitution, the formation of political parties and its first elections this year. The two-year transition, with the 2008 coronation in view, was to give his son as much experience as possible.

He made the transition complete Thursday by placing the Raven Crown on his son's head, formally making him the fifth Druk Gyalpo, or Dragon King.

As such, Khesar becomes "supreme protector" of the nation's security and constitution and the inspiration for gross national happiness.

King Khesar is the eldest son of Jigme Singye Wangchuck and Queen Ashi Tshering Yangdon, the third of four wives and queens, all of them sisters.

One of 10 royal children, he was schooled in Bhutan before going to boarding schools in the United States, Wheaton College and then Oxford University. A bachelor, he has become, as his father was before him, the world's youngest monarch.

As head of state, he is accountable to the country's National Assembly, which can remove him with a two-thirds majority.

During the coronation festivities, traffic was restricted in the capital, but free public transport was provided. Thimphu residents also said the mobile network was down from morning until evening out of respect for the king and security reasons.

Ubiquitous are the yellow-orange and orange-red national flags bearing the dragon, symbol of the Land of the Thunder Dragon.

The coronation coincided with the centenary celebrations of Bhutan's monarchy.

Most of the public festivities took place in the newly renovated Changlimithang Stadium, with performers representing different parts of the kingdom.

"We are very happy," said Kencho Dem, a dancer with the Royal Academy of Performing Arts. "He's very kind. He will develop our country, and he will make more relations with other countries. I hope he will employ more youth."

Already considered "the people's king," the new monarch entered the stadium's stands, greeting people from one end of the stadium to the other.

At one point, the king came down to the field to admire a giant "greeting scroll," measuring over 100 meters long, with letters, art and poems from 418 children from across the kingdom.

"Our king's like a river. It never ends," said one message.