YANGON, Myanmar (CNN) -- Courts in Myanmar have sentenced a blogger, a poet and several dissidents to several years in jail for anti-regime activities, a court official told CNN Tuesday. 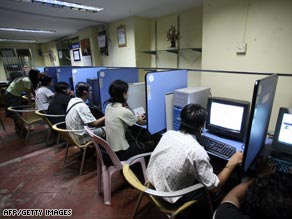 Young people at an Internet cafe in Myanmar.

The verdicts were announced Monday and Tuesday, the court official said.

Blogger Nay Phone Latt was sentenced to more than 20 years in jail for his illegal Internet activities, the court official said.

The blogger was a "major source of information for the outside world" when the military junta used force last year to suppress anti-government demonstrations, said The Irrawaddy, an online newspaper published by exiles from Myanmar, which is also known as Burma.

The government exercises strict controls over media outlets in the southeast Asian country. Dissidents often turn to the Internet to disseminate information.

In the second case, poet Saw Wai received a two-year jail sentence for a poem he wrote for Valentine's Day that contained a veiled jab at the junta's leading figure, Senior Gen. Than Shwe.

The first words of each line in the eight-line poem, "February the Fourteenth" spelled out the message: "Senior General Than Shwe is crazy with power."

On Tuesday, the government handed down prison sentences to about a dozen members of a pro-democracy group known as the '88 Generation Students.

Irrawaddy said the members were each sentenced to 65 years in jail, but CNN could not independently confirm the figure.

Members of the group took part in the anti-government demonstrations that ended with the death of as many as 100 people last year after security forces clashed with thousands of protesters. The dead included 40 Buddhist monks.

Witnesses said the violent crackdown in September 2007 came as hundreds of monks defied a military ban on public assembly.

Until then, demonstrations led by the monks -- who are highly respected in the predominantly Buddhist country -- had gone largely unchallenged by the military, which has ruled the country since the 1960s.

The protests were sparked by a huge fuel price increase imposed by the military government, and quickly escalated. The action was informally dubbed the "Saffron Revolution" because of the maroon robes with saffron sashes that the monks wore.