Getting good karma from the business guru

CHENNAI, India (CNN) -- At 68, Christian Fabre, CEO of Fashions International, might be expected to be thinking about retiring. 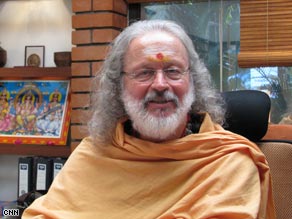 But Fabre, or Swami Pranavananda Brahmendra Avadutha as he is also called, is a practicing Hindu monk as well as a businessman, and retirement doesn't really enter his thoughts.

"I'm having too much fun," he says with a chuckle.

Hardly a gnomic mysticist, Fabre comes across as a jolly old soul, and greets me wearing saffron robes, sandals and sporting the most stylish pair of rimless glasses ever worn by a monk of any denomination.

As we chat in his light, open office on a sunny morning in Chennai, his BlackBerry beeps with new e-mails. Tools of the trade, or at least business, are allowed then?

"How can a man who is supposed to be meditating in a cave do this, you may say. But there is no dichotomy between this and my spiritual beliefs," he says.

A MacBook on his desk and a picture of his guru on the wall, plus the company's 25 percent growth last year, Fabre life seems to be in balance.

However, he admits that reaching the place he's in today, both spiritually and physically, "was no pleasure cruise."

Instead of a backpack and a pocket full of marijuana, he arrived in Chennai in 1971 with a job in the textile-buying business, a wife and a young son. Three years later the job had gone, so too his wife, taking their son with her.

Rather than return to France, he stayed, having been seduced by the richness of Indian culture, but struggled to find more work. He met his current business partner in Fashions International, A. Jayapalana, when embarking on an ill-fated and short-lived venture with a fashion designer.

However his rag-trade to rags to saffron robes existence only developed when he was introduced to the guru of his yoga teacher.

"He'd suffered from leprosy, but radiated happiness and energy. It dried my tears; I had no right to cry over myself. I also wanted to know his secret, and after meeting regularly for six months, he told me I was right to become a swami."

As a child, Fabre had wanted to become a priest, something his communist railway-worker father completely rejected.

"Who knows how he would take it, but I'm sure if I was telling him about my spirituality, he would agree. Communism and Hinduism go well together in some Indian states, although I'm sure Karl Marx would wonder what it's doing here," he says.

Depending on how much work he has to do, every month Fabre spends around a week at his ashram, where he has some disciples. It's an eight-hour drive from Chennai and two miles from the nearest village, where he has more time and space -- and less clothing -- in which to further his spiritual practices.

His personal life is more ascetic than his BlackBerry-bleeping office existence. He does however have satellite TV at home and the Internet at his hermitage, plus a personal driver, but one thing he always carries with him is a spiritual self-awareness.

"Everything is the ultimate. It is a very leveling spirituality, is it not?" he says, the French accent slipping into an Indian lilt.

"I can be a businessman and a swami without losing that awareness. It's within and it's without. It's the ultimate and the universal and beyond the universal. It makes you understand a lot in a split second, and you can see things from many angles."

One thing he clearly understands is the fashion business. As an outsourcing supply company, Fabre's company is indirectly responsible for employing around 80,000 people in 200 factories around Tamil Nadu, and his clients include labels such as Kenzo, Lee Cooper and Oxbow.

Fabre himself is given a modest monthly salary of around $400 (kept in a safe, bank accounts aren't allowed), most of which goes on food, bill and petrol.

His spirituality and belief in karma informs the way he lives as well as his business ethics, but don't affect his business decisions. There would be no problem with dismissing a staff member if the need arose, he tells me.

However being a swami, he can't sign contracts either with his staff or Fashions International's clients, which he says has only caused a problem once.

Much of that he owes to the open-minded people who work in fashion.

"They tell me I am well integrated," he says with a laugh. "They also feel that you are an honest person, although I don't agree with that reasoning. You could be a monk and a bad one."

If there's no contradiction between being a Hindu monk and running a successful company, there's a certain irony about Fashions International's new venture: their own line of clothing named after their CEO, whose wardrobe consists of four yellow pieces of cloth and is more taken to being naked.

Not quite the emperor's new clothes, Fabre business acumen tells him they're getting in on selling their own range of clothing at the right time.

"Going into the domestic market is a wise choice. If the American market, or circus, I might call it, goes wrong, we'll have something to fall back on. Also we are taking the brand to South Africa, which is also booming."

Walking around his office, he appears more like a favorite teacher than a boss with his staff of young designers and sales and marketing employees, but he admits that he's not always easy to work with.

"My guru said: 'Never prevent anyone from coming and seeing you.' But sometimes its strenuous when someone is boring, but then you keep it short and they leave feeling positive," he says with a smile.

As his personal assistant of 13 years, Pinky Lahiri knows as much about the swami formerly known as Christian Fabre as well as any.

"He is strict and he has his principles," she says, while Fabre takes a break for lunch. "He used to get angry quite easily, he's much calmer now than when I first met him. It could be his age," she jokes, "but it's probably his spirituality."

Switching from caffeine and a 60-cigarette-a-day habit to a strict vegetarian diet no doubt helped reduce stress levels.

He's been to parties with designers and fashionistas including Jean-Paul Gaultier -- "a lot of fun" -- and is regularly feted by the French chamber of commerce, but that's not the reason he's spent so much of his life in the fashion industry.

As well as the jobs he's helped to create, he sees fashion as something that gives people the chance to express themselves, present an image and change it if they want.

More significant transformations though are harder to come by. Gandhi's famous quote: "For things to change, first I must change" appears on signs on desks throughout his office.

"People don't like to change. They're ensconced in their traditions, their habits, my god! You have to have tradition in society, but some are no longer valid. You have to be able to balance that correctly.

"It's not a question of faith; it's not an intellectual thing, either. It comes from the intellect and the heart, and usually this distance is not far away, but for some it takes a long time," he says.

A businessman, a swami, and now a brand, Fabre is clearly enjoying himself and prepared for any more changes.

"I'm having a hell of a good time, but it would very boring if everyone was like me."