PHNOM PENH, Cambodia (CNN) -- Youk Chhang knows the truth about the Cambodian genocide perhaps better than anyone in the world. 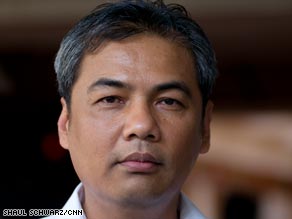 Youk Chhang runs the Documentation Center of Cambodia, which has documented 20,000 mass graves.

He was 13 when the Khmer Rouge came to power. Separated from his family, forced into slave labor, beaten nearly to death for stealing rice for his pregnant sister, he saw the horrors firsthand.

His mother lost a daughter and four siblings; 30 years later she still searches for them, hoping they survived.

Chhang survived by eating whatever he could find. After the fall of the Khmer Rouge, it took him months to walk home to his family. Eventually, he fled to safety in the United States.

"Food was ... more important than God," Chhang said. "I always wish to have a bowl of rice. And one good night's sleep. That's all I wanted. I would do anything for it."

Watch Youk Chhang talk about what he ate, how he survived »

But the ghosts of the genocide brought Chhang back to Cambodia. And for more than a decade, he has run the Documentation Center of Cambodia.

"DC-Cam," as it is known, is the world's largest repository of information about the Cambodian genocide. It holds hundreds of thousands of documents, photos and films as well as interviews with both survivors and former Khmer Rouge members.

Chhang said he believes the Khmer Rouge kept such careful records as a measure of their success -- a trophy of sorts.

"At each time when they kill a person, they document it so that they can measure their success one step forward," Chhang said. "If they kill two, then two step forward. If they kill five, then five step forward. So to them, it's a golden file. But I mean, to us it's crime against humanity."

DC-Cam has located and mapped nearly 200 prisons and 20,000 mass graves across the country. For Chhang and DC-Cam, the work is critical to preserving memory and promoting justice.

Today in Cambodia, a tribunal is under way to try five of the surviving leaders of the Khmer Rouge -- 30 years after their alleged crimes. DC-Cam is providing much of the evidence for use in the trial, evidence that makes plain the facts of the genocide, the scope of the losses and the personal and national grief.

Chhang said he hopes the tribunal will help Cambodians move forward -- and help heal the nation he loves.

But even now, the way forward is difficult. Chhang has dedicated a lifetime of work, research, preservation and advocacy to his mother, whose bravery and sacrifice inspired him.

Even though his mother survived and they shared much of the same pain and many of the same losses, the two do not talk about what happened. Some in Cambodia are anxious to forget and forgive. Others are angry and searching for justice.

Many, like Chhang, said that only by knowing, exploring and exposing the truth will Cambodia be able to rectify its past -- and secure a healthy future.

All About Cambodia • Khmer Rouge