Former Khmer Rouge: 'If you don't do what they say, you die' 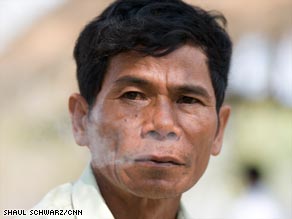 Him Huy: "As soon as I got there, I felt that something was wrong."

Across the country, 20,000 mass graves stand as silent witnesses to the horrors that took the lives of more than 2 million Cambodians. During the rule of the Khmer Rouge, Cambodia's lush countryside was transformed by slave labor, starvation, fear and execution.

Him Huy saw it all firsthand -- as a member of the Khmer Rouge.

In 1976, he was part of a military group, he said, and was ultimately assigned to work at the notorious prison at Tuol Sleng.

"As soon as I got there, I felt that something was wrong," he said. "This place kills generations. We all had a sense of what was going on. I knew this place would be full of death."

Once a high school in the middle of Cambodia's bustling capital city, Tuol Sleng was transformed by the Khmer Rouge into a prison and torture center.

In the hallways and classrooms, claustrophobic, rough-hewn cells and interrogation rooms were built to keep prisoners. Other prisoners were held for days and weeks at a time, packed in larger rooms and forced to lay motionless on the floor side by side.

At Tuol Sleng, so-called "political prisoners" were interrogated, beaten, tortured and forced to confess. The barbaric rules for prisoners were posted on the wall, and instructed them, among other things, that "while getting lashes or electrification, you must not cry at all."

Watch the rules for prisoners at Tuol Sleng »

During the reign of the Khmer Rouge, almost 15,000 men, women and children were brought to Tuol Sleng. Only seven survived. The rest were executed and buried at the killing fields at Choeung Ek.

Him Huy says he was occasionally forced to hit prisoners at the graveside before others came to slit their throats and finish the job.

Watch Him Huy demonstrate what he did at Choeung Ek »

Some witnesses accuse Him Huy of taking an active role in the horrors at Tuol Sleng, including executing prisoners and separating infants and children from their mothers and sending them to slaughter. Him Huy said he was only doing what he was forced to do.

"We did not do this on our own. The Khmer Rouge brought us here, and we knew nothing. And once you got here you cannot leave. The tasks were assigned and told and done. So if someone was assigned to spy, they spied; if they were assigned to guard, they guarded."

Him Huy said no one dared resist. "During that time, you do what you can to survive. If you don't do what they say, you die."

All About Genocide • Cambodia • Khmer Rouge