Taliban leader: We have no faith in Obama

ISLAMABAD, Pakistan (CNN) -- Barack Obama's election as president of the United States won't see a change in American relations with the Taliban, a senior Taliban leader in Pakistan says. 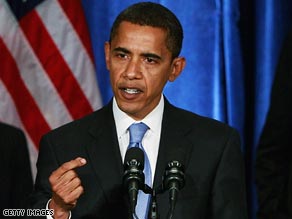 "For us, the change of America's president -- we don't have any good faith in him," said Muslim Khan, a grizzled Taliban spokesman who is one of the most wanted men in Pakistan, in a rare interview with CNN. "If he does anything good, it will be for himself."

With an assault rifle on his lap, Khan answered 10 written questions, sharing his view on a range of topics from slavery to Obama's middle name -- Hussein.

He spoke in the remote Swat Valley of northwestern Pakistan, the site of frequent and fierce clashes between Pakistani troops and Taliban and al Qaeda militants.

There was no opportunity for follow-up questions.

"The black one knows how much the black people are discriminated against in America and Europe and other countries," he said. "For America's black people, it could be that there will be a change. That era is coming."

He said he doubted Obama's victory would lead to changes in relations between the United States and the Taliban.

U.S. forces dislodged the Taliban rulers of Afghanistan shortly after the September 11, 2001 terrorist attacks on New York and Washington.

America and its allies have battled the Taliban and al Qaeda in Afghanistan ever since, with fighting spreading across the border into Pakistan.

"American should take its army out of the country," Khan said. "They are considered terrorists."

Obama has minced no words in describing how he would administer U.S. policy toward the Islamic extremists in Afghanistan and Pakistan.

When he accepted the Democratic presidential nomination in August, Obama pledged to "finish the fight against al Qaeda and the Taliban."

And the president-elect included a blunt warning in remarks on the evening of his election victory: "To those who would tear the world down," he said, "we will defeat you."

Khan noted that Obama's middle name was fairly common in the Muslim world, referring to him at times as "Hussein Barack Obama."

"If he behaves in the way of a real Hussein, then he has become our brother," he said. "If Barack Obama pursues the same policies as Bush and behaves like Bush ... then he cannot be Hussein. He can only be Obama."