ISLAMABAD, Pakistan (CNN) -- Pakistan's foreign ministry summoned U.S. Ambassador Anne Patterson on Thursday to lodge a formal protest against another suspected U.S. missile strike on its territory, an act the country's prime minister called a violation of his nation's sovereignty. 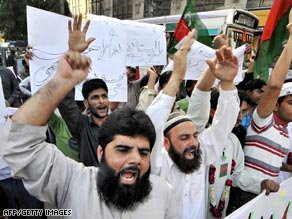 Activists shout slogans during an anti-US protest rally in Karachi on Thursday.

The strike in the Bannu region of Pakistan's North West Frontier province left five dead and seven wounded Wednesday. It was deeper inside Pakistani territory than previous attacks.

It targeted a home outside the tribal areas that U.S. intelligence says have become a haven for Taliban and al Qaeda fighters battling U.S. and NATO troops in neighboring Afghanistan.

The attack was the third suspected U.S. strike on Pakistani soil in November and the first to hit outside the tribal districts. At least three non-Pakistanis were believed to be living at the home that was the target of the raid, local official Abdul Hameed, told CNN.

A senior U.S. military official told CNN on Wednesday that a top al Qaeda operative is believed to have been killed in Pakistan during a U.S. airstrike, but couldn't confirm whether the man died in the attack in the Bannu region.

The U.S. government has not acknowledged hitting targets within Pakistan, an ally in the war on al Qaeda launched after the September 11, 2001, attacks on New York and Washington. But Pakistan's government has repeatedly complained about the strikes.

Prime Minister Yusuf Raza Gilani renewed his condemnation of the attacks Thursday in parliament, but added he thinks they will be controlled when President-elect Barack Obama takes office.

"They are not acceptable. We do not support these attacks and we have condemned these acts," he said. "But I assure you that these things are happening because the U.S. government is in a transition period. It will take few weeks or a few months. When Obama forms his government these attacks will be controlled."

In October, the foreign ministry summoned Patterson to lodge a "strong" protest on continuing missile attacks and said they should be stopped immediately. At the time, a missile strike from a suspected U.S. drone on a compound in South Waziristan killed 20 people.

The U.S-led coalition and NATO -- based in Afghanistan -- have been seeking a way to effectively battle militants who are launching attacks from Pakistan's swath of tribal areas along the border.

They have become frustrated with Islamabad over the years, saying it is not being proactive enough against militants -- a claim Pakistan denies.

The United States is the only country operating in the region known have the capability to launch missiles from drones, which are controlled remotely.